Charlestown-Nevis–A number of persons comprising of family members, friends and a huge representation from the music fraternity of St.Kitts and Nevis, showed up on Saturday, June 27, 2015 at the Charlestown Methodist Church, to pay their final respects to the man, Alexandre Adolphus Charles aka Adolph. 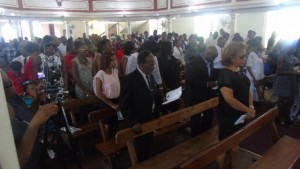 The main home going service was preceded by an extended musical concert of sorts, featuring some of the top musical acts within the federation.

There was intense drumming led by Ras Binghi; Halstead Sooty Byron and Ervin Ounce Weekes. This was followed by outstanding musical renditions and other tributes by individuals and groups which included: Jazzique Chiverton; Oualie Pan Vibrations; Eclectic band; Samantha Boone and Shenel Wilkins; Caribbean Roots; The Nevis Cultural foundation; the Nevis Culturama Secretariat and Alamolou who rendered a calypso in the honour of the late musician. 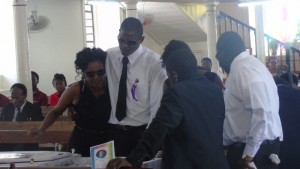 The eulogy was delivered by close friend and fellow musician, Rohan Claxton who praised Adolph for his contributions in the music field of St.Kitts and Nevis. He pointed out that he was a guitar tutor at the Sherzando Music School which he operates along with his wife and noted that he had assisted the students in a great way.

He also indicated that the students at the Gingerland Secondary School who had attempted overseas examinations pertaining to guitar music, had all been successful, thanks to the assistance received from Adolph.

He described him as a humble man who was always willing to give a word of encouragement and lend a helping hand.

He also noted that apart from his beloved bass guitar, Adolph played several other instruments, including the keyboards and fife.

Claxton also indicated that he was an ardent reader and instilled the same zeal for reading in his children.

A member of the Church of Latter Day Saints also made the revelation that in recent times, Adolph had become a member of the church and described him as a wonderful human being.

His five children and long standing girlfriend all wept openly, as did others, during the period when the body was being viewed.

The sermon for the service was presented by Rev. Telford D. Matthew and the body was interred at the Bath cemetery.

The late Adolph played his beloved bass guitar for the last time on the evening of Friday 19th June, in a gig with the Eclectic band and by Saturday morning, after a sudden bout of illness, he was no more.
Culturama Secretariat on Nevis, Antonio Abonaty Liburd stated that ‘he will be surely missed.’