(EMU) – St. Kitts, April 5, 2013: Teachers in Government high schools in St. Kitts were the first recipients of the eagerly anticipated “Laptops for Teachers” phase of Government’s programme to raise the standard of teaching and learning through technology. 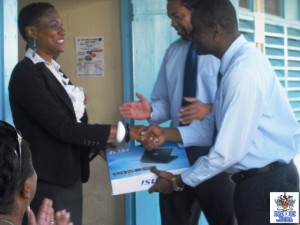 Ministers from the Ministries of Education and Technology, which partnered to make the project a success, distributed the laptops to the teachers in short ceremonies held on April 4th.

Minister of Education and Information Hon. Nigel Carty emphasized that the programme was designed to ensure its sustainability. “The teachers are going to have full ownership of the laptops but only if they remain in the profession for one year after having received the computer,” he explained. He further stated that those who leave the profession prior to one year would have to return the laptops for the teachers who would succeed them.

Minister Carty thanked the technicians and other key persons involved in preparing the equipment for use and voiced special appreciation for Education Planner, Mr. Quinton Morton, for his leadership with the project.

Minister of Technology, Hon. Glen Phillip, told teachers that he was cognizant of the fact that “disseminating information to students can be intimidating”. He added that this phase of the project sought to gear teachers with the requisite tools by procuring software that would assist them in this regard. He revealed that the Ministry was in discussions with Microsoft and had acquired GIS software to give teachers the opportunity to become computer savvy.

An additional benefit of the programme was pinpointed by Minister Philip, that of the possibility for teacher/parent relationships to blossom as a result. He referred to the likelihood that teachers would now use the tool to communicate more frequently with parents by providing information on student behaviour, progress and attendance where necessary, whether for the purpose of encouraging or discouraging the behaviour.