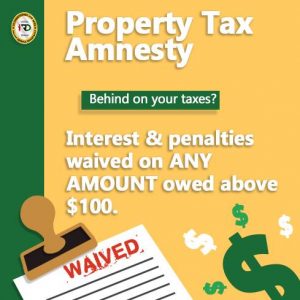 BASSETERRE, St. Kitts, July 25, 2019 (Press Unit in the Office of the Prime Minister) – Homeowners who are in arrears with respect to their Property Tax are being encouraged to take advantage of an extension of the Property Tax Amnesty Programme announced by the Government of St. Kitts and Nevis this week.

A press release issued by the Inland Revenue Department, dated July 24, 2019, stated that, “In an effort to allow taxpayers to become current with their tax obligations, the Government of St. Kitts & Nevis is extending its Property Tax Amnesty Program, which includes a 10% reduction in the tax amount and the total amount of penalties and interest due to only $100.”

The release went on to state that taxpayers with arrears are encouraged to visit the Inland Revenue Department (IRD) to discuss how they can be assisted through the amnesty programme, and noted that, “Flexible payment plans are available for taxpayers who are unable to settle the full amount before the end of the amnesty period.”

To be a part of the Property Tax Amnesty Programme, all payment plans including deposits must be made on or before 31st January, 2020. The length of the payment plan and a minimum deposit would be determined after consultation with the Inland Revenue Department. Taxpayers are to note that in default of any payment, interest and penalties would be reinstated, the press release said.

While announcing a similar amnesty programme in 2018, Prime Minister and Minister of Finance, Dr. the Honourable Timothy Harris stated that his administration is of the view that a Property Tax Amnesty “can be a useful tool to supplement our Compliance Strategy.”

The prime minister noted then that through the tax amnesty, the government was creating an easement by reducing or waiving interests and/or penalties associated with these arrears.

For additional information, persons are encouraged to contact the Department’s Debt Management & Filing Compliance Unit at (869) 465-8485 Ext.3438 or visit our new office (Former John Gumbs Building) on the Bay Road.