By Erasmus Williams: Basseterre, St. Kitts, February 8, 2018 (St Kitts-Nevis Labour Party)- Prime Minister of St. Kitts and Nevis Dr. the Hon. Timothy Harris has been accused of keeping bar owners on Friar’s Bay Beach in the dark for months about the sale of private lands in the area until they had received notices to vacate the property within one month.

Central Basseterre Parliamentary Representative, Hon. Marcella Liburd exposed the “heartlessness” of Dr. Harris in hoodwinking the bar owners by giving the impression he is trying to find a last minute solution to the closure and removal of their businesses knowing full well that he, his Minister of Tourism, Hon. Lindsay Grant and his cabinet ministers, have been deeply involved in the negotiations for its sale and the granting of concessions for the construction of the proposed hotel.

The portion of the land amounts to 300 acres, which was purchased in the 1980’s by a Kuwaiti born citizen of St. Kitts and Nevis who purchased the land during the Kennedy Simmonds PAM administration from the Bank of Commerce which was in liquidation.

“The land was never developed by the Kuwaiti family. A son of the family placed the land on the market for sale. Within the last year, a company out of the United States bought the land from the Kuwaiti family and has had an application before Dr. Harris to develop the land,” said Liburd during Wednesday’s Issues programme on Freedom 106.5 FM and Kyss 102.5 FM.

“The local vendors in their lease arrangements have been given 30 days to vacate the property. What is extremely important is that since the US company bought the land, Dr. Harris has been looking at an application to develop the land for a hotel. Timothy Harris and his Team Unity Government have approved the application for the development of the land. Harris has approved building permits and fiscal concessions within the last six months or more,” she pointed out.

Liburd said Dr. Harris knew for a long time that the land was going to be developed and that locals were making a living to feed their families.

“At no point in time during the last six months or more, did Dr. Harris find the time to go to the local bar owners and inform them of the plans and discuss with them their removal,” pointed out Liburd.

“Dr. Harris knew all along as he has been giving permits, giving concessions and looking at the applications for the development. But Harris did not call in the bar owners to discuss alternative arrangements until the bar owners received letters to quit and there was a public uproar,” Liburd further pointed out.

She accused Dr. Harris of abusing the bar owners by inviting them to cabinet at the last minute to take photos to give the impression that he cares.

“How caring is that, when Dr. Harris knew well in advance that they were going to get letters to quit as for months he has been meeting with the developers,” she said. 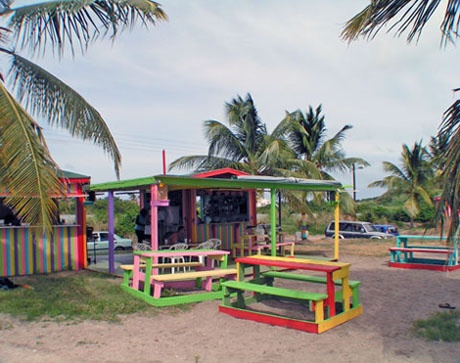 TKR And Patriots Serve Up an Instant Classic