BASSETERRE, ST. KITTS, MAY 16TH 2013 (CUOPM) – The International Monetary Fund (IMF) said Thursday that the economy of St. Kitts and Nevis is projected to recover and grow by two percent in 2013 and that despite a challenging economic environment, the overall fiscal position through end-March 2013 was stronger than expected.

It issued a statement following an April 20th to May 15th visit by an IMF mission led by Mr. George Tsibouris to review recent economic developments and programme performance at end-March 2013, assess progress in structural reforms and discuss economic policies and the outlook for 2013 and beyond. 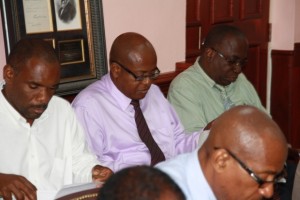 “Economic activity for 2012 is now estimated to have contracted by 1.3 percent, reflecting sluggish construction and tourism sectors. Inflation continued to decline to 0 percent at end-March 2013,” said the statement.

It added that despite a challenging economic environment, the overall fiscal position through end-March 2013 was stronger than expected due to buoyant non‑tax revenue and expenditure restraint.

“Economic activity is projected to recover and grow by 2 percent in 2013, based on an expected uptick in tourism and several large construction projects becoming operational,” the IMF said.

The Mission stated that the 2013 fiscal framework is aligned with the authorities’ home-grown programme of promoting growth by consolidating public finances and putting public debt on a sustainable path.

The consolidated budget, aiming at an overall surplus of 2.5 percent of GDP, envisages enhancing tax revenue through administrative reforms and increasing public investment, while benefiting from interest savings from the debt restructuring.

“In that area, progress continues towards completing the debt/land swap. The mission and the authorities discussed and agreed on a draft memorandum of economic and financial policies for 2013,” said the statement.

It said that the mission will thus be in a position to recommend to the IMF Executive Board the completion of the fifth and sixth reviews under the Standy By Arrangement. The Executive Board discussion could take place in July 2013.

The Mission said it held meetings with Prime Minister and Minister of Finance the Rt. Hon. Dr. Denzil L. Douglas; the Premier of Nevis, the Hon. Vance Amory; senior officials of the Ministries of Finance, Trade, Tourism, and Sustainable Development; the Eastern Caribbean Central Bank (ECCB), the Head of the Civil Service, the Labour Commissioner and representatives of the private sector.

The IMF Mission which included officials from the Eastern Caribbean Central Bank (ECCB) presented its report to a joint meeting of the Federal and CCM-led NIA cabinets on Wednesday.