Charlestown- Nevis- An obviously tired but elated Mrs. Migno n Wade spoke to this media house, towards the conclusion of the inaugural Health expo which was conducted on Wednesday 30th December.
The health expo was held at the Charlestown Secondary school’s auditorium and was scheduled to be held between 12.00 noon and 5 pm but due to the persons present at the late hour, went on until close to 7 pm.
‘Mrs. Wade expressed thanks to all of the persons who showed up for the various health checks and thanked her wide ranging volunteer team members for their tremendous hard work and sacrifice. 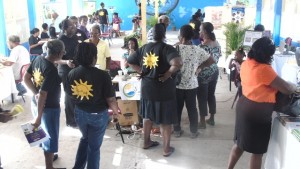 The recorders officially registered 109 persons up to 4.30 pm and there were some who did not register but participated and others who came late after their working hours were completed.
A wide range of Health professionals were on hand to attend to the needs of the scores of persons who showed up.
These included, Nurses, Chiropractors, Massage therapists and Dentists, among others.
There were a multiplicity of booths set up throughout the auditorium and these included a fruits and vegetable stall with a wide range of fruits and vegetables grown on Nevis; a nutrition area where participants were able to sample the hot and tasty lentils soup and vegetable dishes; the book stall, which featured books on a number of topics, including health, courtship and marriage etc.
There were also booths where persons were able to check their blood pressure; glucose levels; get massages done; prayer; counselling; respiratory checks; hydrotherapy demonstrations; discovering health age; Harvard fitness tests and body mass index.
Most of the participants were happy to report that they visited most, if not all of the booths and where there were discrepancies found, persons were sent for counselling and received advice as to how their health status could be improved.
Mrs. Wade stopped short of confirming that the event will become an annual affair but based on the positive feedback, it is obvious that she will have another period of extra hard work in 2016, as she, along with her hard working team, seek to make it an even bigger and better expo.