President of the Nevis Turf and Jockey Club, Allister Thompson, would be the first to admit that the Fathers’ day horse race meet held on Sunday 16th June, was probably not the most exciting event ever held by his Association. 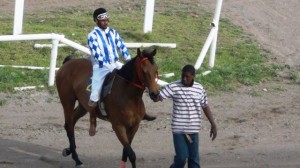 The day started badly and the 3:00 p.m. start turned out to be an after 4:00 p.m. late starter. Eventually it was announced that there was a Jockey crisis that had stalled the show.

With Brem Liburd unavailable for the day, only two Jockeys were on hand, with three more expected over by boat from St.Kitts. Unfortunately the three Jockeys expected over from St.Kitts, were left stranded at the dock as they miscalculated in terms of a changed schedule for the boat.

Faced with a dilemma, the Nevis Turf and Jockey Club had two basic choices: Call off the meet and give back the patrons their money or make some adjustments. The members of the Association settled for the adjustments. After all, the music was blaring; there was an appreciative crowd on hand and this included a fair number of visitors to the island.

The adjustments made, meant that the races were organized in such a way that there were match –ups, with two horses racing at a time, utilizing the same two jockeys for every single race.

Somehow, some of the horses sensed that something was not right and with the Jockeys each wanting to get an early start in each race, there were a number of false starts and it all ended with one horse racing around the track with the white flag still up and the other jockey still waiting in the saddle for a start.

The crowd however found other means of entertainment and the afternoon was still well spent as there was music, food and drink to keep them going and there was also the odd race that appeared somewhat competitive.

Thompson has indicated that suitable arrangements will be made ahead of time for the Jockeys to be on island for the two big races coming up: The Culturama meet in late July or early August and the signature event of the year-The Dan Bartlette Memorial Stakes, in September
The results for the Fathers’ day event are as follows:

Race one
1st GREY GHOST
2nd ALL EYES ON ME

Race five
The two horses were WILD CANDY and REAL MAGIC. One of the horses went around the track while the other remained at a standstill.