Kim Collins, the fastest St. Kitts and Nevis national ever, has been left out of the country’s team for the Moscow 2013 World Championships. 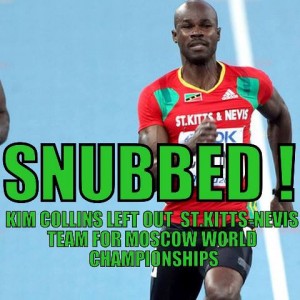 The St. Kitts & Nevis Amateur Athletic Association (SKNAAA), on Tuesday, released its six-member team for the August 10-18 Championships with Collins, who just over a week ago ran a national record of 9.97secs. Faster than any other national of St.Kitts-Nevis has ever ran.

Collins, days later followed up the record run with 9.99secs, only his third sub-10 seconds clockings in his almost 2 decade long career.

Collins, the 2003 World 100m champion, won bronze in the same event at the last Championships in Daegu, South Korea.

Evris Huggins, Public Relation Officer of the St. Kitts & Nevis Amateur Athletic Association, said Collins was not selected because he “did not meet the selection criteria as outlined by the SKNAAA World Championships in Athletics Standards.”

Meanwhile, six athletes and two officials were selected to represent the federation at the 2013 IAAF World Championships in Moscow.