Land and home ownership remains a priority for Labour Government

BASSETERRE, ST. KITTS, APRIL 16TH 2013 (CUOPM) – St. Kitts and Nevis Prime Minister the Rt. Hon. Dr. Denzil L. Douglas said that empowering the people through land and home ownership remains a priority for his Government as it is considered a vehicle for upward mobility. 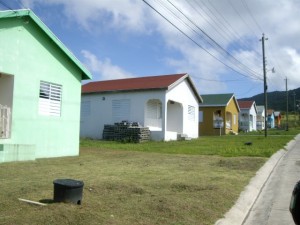 “Recognizing this benefit and the need to further strengthen the recovery process, particularly in the Construction Sector, my Government has provided the facilitating environment and negotiated with the Sugar Industry Diversification Foundation (SIDF) to provide financing for two initiatives in partnership with our own indigenous financial institutions; the Fund for the Realization of Economic Empowerment through Subsidized Housing (FREESH) and the Equity Assistance Fund (EAF). FREESH provides access to loan resources up to $500,000 at a fixed interest rate of 5% for residential construction while the EAF provides access to facilitate the removal of barriers to obtaining a residential mortgage such as legal fees and the required down payment,” said Prime Minister Douglas, who applauded the SIDF, the Development Bank of St. Kitts and Nevis and the St. Kitts and Nevis Finance Company Limited (FINCO) for their partnership during this period of economic recovery.

Dr. Douglas said that the construction Sector has been a major growth area in the economy and the decline in output over the past four (4) years continues to impact the economic and social development of the Federation.

In an effort to stimulate the economy, the Government implemented the Building Materials Incentives Programme in June 2011 which provided for a reduction in taxes applicable to building materials for first time homeowners’ construction projects valued up to $400,000.

As of December 2012, over 350 applications were approved and it is anticipated that additional applications will be submitted for approval before the end of the year.

Dr. Douglas said that some of the benefits of this programme can be seen in the Eastern Caribbean Central Bank (ECCB) Commercial Banking Statistics Report which indicates that as of December 2011 personal credit issued in St. Kitts and Nevis increased by 3.6% to $915.5 million when compared to December 2010.

The Official Dubai Address of The Honourable Minister of Tourism, Civil Aviation and…