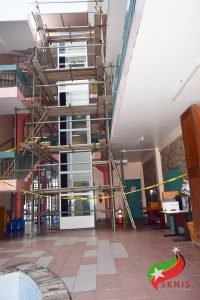 Basseterre, St. Kitts, July 04, 2019 (SKNIS): Wheelchair users and others with mobility challenges in St. Kitts will soon find that doing business at Government Headquarters in Basseterre is about to become easier after the installation of a space efficient platform lift.

“It is all in an attempt to ensure that we make the Government Headquarters accessible to challenged persons, persons who have to move around in wheelchairs,” said Osbert DeSuza, Permanent Secretary in the Office of the Prime Minister.

The installed lift is a Cibes A5000 and is described by its manufacturers as “a smart and adaptable lift solution for public and commercial buildings.” PS DeSuza noted that it can accommodate up to five persons of average weight.

“We have had cases where elderly persons would have had to do business at Government Headquarters and [needed] to access the top floor using the staircase that we have here, and we figure that the lift will also be of some assistance to them,” he stated. “We have had cases too, where persons who are pregnant had to mount the steps to go and do business on the top floor. They can also use the services of the lift.”

Additionally, a ramp will be placed within the Prime Ministers’ Office allowing access to an area where there are steps. Mr. DeSuza said that the impending commissioning of the lift and the construction of the ramp will make all areas within Government Headquarters wheelchair accessible.

Other public buildings have also been equipped with mobility friendly features such as the John Gumbs Building, which has a special wheelchair access area to facilitate persons doing business with the Inland Revenue Department. The three-storey building under construction, that will house the Government Printery, will also be wheelchair accessible and feature a lift.

The lift at Government Headquarters was installed by RBP Lifts of Trinidad and Tobago. A local engineer, who works with the company, will perform regular maintenance to ensure the device operates optimally.