Basseterre, St.Kitts (July 6th 2013):- After 6 of the most intense and highly charged hours in the history of St.Kitts-Nevis former Leader of the People’s Action Movement Mr Lindsay Grant was released from police custody at close to midnight on Friday evening. 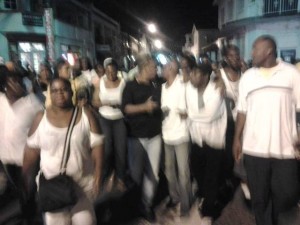 Grant had been earlier arrested while leading a large protest march through the streets of Basseterre in heavy rainfall. A confrontation took place between Grant and a RIOT GEAR clad POLICE officer who from reports and video footage seemed to have dragged the PAM Candidate through the barricade with excessive force and was then taken to a nearby Police Van and arrested .

Grant was held for some 5 hours while hundreds of supporters descended on the Basseterre Police station demanding his release chanting “FREE MR GRANT….FREE MR GRANT!!!”

Despite the continuous heavy rainfall the crowd remained and chanted FREE MR GRANT until he was released after almost 6 hours in Police Custody.

Grant was mobbed upon exiting the police station by hundreds of supporters who then escorted him to his office just a few hundred yards away on Church Street . They camped outside determined to ensure that he left his office safely.

The police have not issued a statement on Mr. Grant’s arrest.