The Leadership of Team Unity attended Mount Carmel Baptist Church on Sunday 21st September, 2014 to mark their one year anniversary. 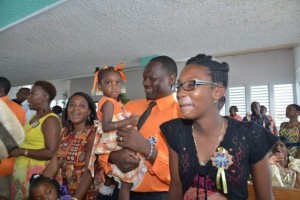 A massive following of supporters and well wishers were enjoined in the worship promoting one of the worship leaders to say, “Today our church is overwhelmed by this attendance.” In attendance were the Premier of Nevis, Hon Vance Amory, Dr the Hon Timothy Harris, Leader of Team Unity, Hon Shawn Richards, Hon Sam Condor, Hon Eugene Hamilton, Senator Vincent Byron, Lindsay Grant and Ian “Patches” Liburd. Jonel Powell, Team Unity’s candidate for Central Basseterre was absent on account of illness.

The scripture reading was done by the Hon Shawn Richards. Brief remarks were made by Dr the Hon Timothy Harris. The Unity National Choir and Constituency #7 Choir gave their renditions in the form of songs. The Church was especially blessed by the angelic voice of Natasha a resident from Constituency #7.

Team Unity’s activities continue with house to house activities and a massive public meeting on Thursday 25th September in St.Peters.