Meeting on unified approach to curb crime on Nevis described as fruitful; candid

NIA CHARLESTOWN NEVIS (June 28, 2013) — Cabinet Secretary to the Nevis Island Administration (NIA) Mr. Stedmond Tross described a close-door meeting between the Cabinet of the NIA and a number of nongovernmental organisations as extremely fruitful and candid. 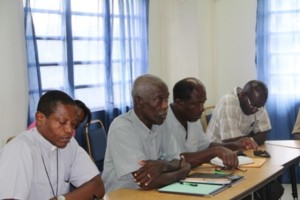 The Cabinet had earlier invited a cross section of groups from the community to the meeting on June 27, 2013 at the Ingle Blackett Conference Room in Charlestown, to establish a unified approach to the issue of crime on Nevis.

“The meeting was extremely fruitful and candid. Those present gave ideas and suggestions as to how we move forward as a community and they asked that we meet again in the future,” he told the Department of Information one day after Premier of Nevis and Minister responsible for Security Hon. Vance Amory convened the meeting.

Meantime, in a press statement following yesterday’s meeting, Mr. Amory noted that the discussions were held in an atmosphere of cordiality and that the Administration had given its commitment to the installation of Close Circuit Television (CCTV) around the island and to provide concessions to businesses and homes for the importation of security systems.

Mr. Amory also gave an insight into some of the issues raised at the meeting.

“Coming out of the discussions were: that there is the need for the Nevis Island Administration, the church and other stakeholders to work more closely. It was noted that we are losing our culture and traditions that kept us together and defined us as a people. It was noted also that families must play an active role in helping to curb crime by training their children and teaching them good behaviour and manners.

“The education system must re-evaluate school shows to minimise instances of lewdness and pay greater attention to the late hours they were held especially during the Culturama festivities; the Police must be visible and must try to develop mutual trust with the community by improving the response time. People are encouraged to call Crime Stoppers (1-800-8477),” he said.

According to Mr. Amory, the meeting was the first in a series in an effort to eradicate crime from the island for the preservation of peace, stability and security on Nevis that would facilitate the long-term economic and social viability of the island.

Johnson ‘anxious’ over rise of Indian coronavirus variant in UK