CHARLESTOWN, NEVIS, DECEMBER 31ST 2014 (CUOPM) – The distribution of laptops to students of the first forms of the Gingerland Secondary School and the Charlestown Secondary School in Nevis, is in keeping with a promise made by Parliamentary Representative for Nevis 11, the Hon. Patrice Nisbett.

“You are indeed witnessing the delivery on a promise, a promise to ensure that each Secondary School Student, each first former either at the Gingerland Secondary School or at the Charlestown Secondary School receive his or her own personal laptop. I want to say to you must see this as an empowerment device, a device that you will use in order to ensure that it assists you in achieving whatever your personal goals are in life,” said Mr. Nisbett, the Minister of Foreign Affairs, Homeland Security, Labour, Justice and Legal Affairs.

Speaking at the presentation of laptops to students at both schools, Mr. Nisbett urged the recipients to use the laptops “to advance your educational pursuit, to have access to the necessary technology, have access to the necessary knowledge, because by and large, this is an information driven world and what your Federal Government is ensuring is that the children are exposed, the children of Nevis are technology-enabled so that you will be able to become better, your results will be better and you will be better off later in life and would be able to make a better contribution to the development of Nevis.”

“We are exposing you to cutting edge technology that will ensure the sustainability of the twin-island State of St. Kitts and Nevis because you are the future of St. Kitts and Nevis and this is by and large, an investment in you. We want you to use this device so that later on, the people can see the return on their investment because as we entrust these computers into your care, we expect that you will take care of them, we expect that you will maintain them,” said Mr. Nisbett, who along with St. Kitts and Nevis’ Prime Minister the Rt. Hon. Dr. Denzil L. Douglas and Minister of Information Technology distributed the laptops.

“I don’t expect that people will be calling me tomorrow saying that water fell on their device. I don’t expect to receive the numerous amount of calls that I received daily to replace the laptops. I know persons who have gotten laptops since the first time that we had issued laptops in Nevis and they still have them,” said Mr. Nisbett, the lone Nevis Parliamentary Representative in the Federal Government of Prime Minister the Rt. Hon. Dr. Denzil L. Douglas.

“I want to admonish you, the children of the Charlestown Secondary School to please take care of these laptops. Much is expected of you when these laptops are given to you and so we expect that the children of Nevis will look after these laptops,” he said, pointing out that over 1,000 laptops have been distributed to students in Nevis alone.

“This programme was not designed for the children of Nevis. This program was designed for the children of St. Kitts by the Federal Government, but we have ensured that it has been extended to you and so as you receive these gifts, I want you as responsible individuals, the responsible children that you are, that you maintain, use these devices wisely and make the Federation of St. Kitts and Nevis proud,” said Mr. Nisbett. 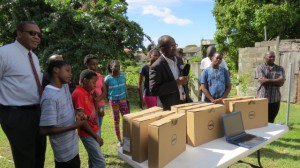