It was the brain child of the Nevis Amateur Basketball Association (NABA) and was well executed on Sunday 16th June, at the Grell-Hull-Stevens Netball complex.
It was a ‘Fathers’ day extravaganza’ and featured two teams from Nevis and two from St. Kitts.
During the brief opening ceremony, ably chaired by Ms. Shoya Lawrence, the invocation was done by Mrs. Wanda Parry-France; the national anthem was played by the DJ and NABA’s president, Mr. Freddie Hanley delivered welcoming remarks and gave a historical background as to the development of Basketball in Nevis, and the early years of the tournaments held.
He also vowed to once again fill the stands, during upcoming games.
Minster of Sports, Hon. Eric Evelyn delivered the feature address and he paid kudos to the work done by past president, Mrs. Wanda Parry-France and told the new president that he has some big shoes to fill, but encouraged him by further 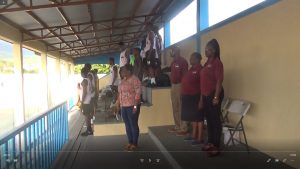 indicating that with hard work, he will succeed.
Main sponsor of the tournament, and Area representative, Mr. Spencer Brand, indicated that he was happy to contribute so significantly to the tournament, to be considered the main sponsor and told the basketballers that when they need assistance, his administration will try its utmost to assist where possible.
He made a concerted appeal to the players and others, to follow the mantra of the Basketball Association which states: ‘Through Basketball, we fight crime.’
He insisted that once they get involved with such sporting activities, they will be less inclined to get involved in anti- social behaviour.
During the ceremony, two stalwarts of the early years of Basketball in Nevis, Mrs. Josette Myers (first NABA Secretary) and Mr. Glenford Herbert, received special awards for their pioneering work and continued efforts, to make the sport great on the island.
Immediately after the ceremony, two games were played:
High Schools’ Basketball champs on Nevis, CSS, engaged their counterparts from St. Kitts –Verchilds High and this was followed by Rams Hitters versus Youth and Sports Eagles of Nevis.
A sizeable and enthusiastic crowd was on hand, to witness the encounters.