PRESS RELEASE…(Jan. 4, 2018) — While many spent the holiday weekend enjoying the festivities associated with St. Kitts and Nevis’ National Carnival, the staff of the Nevis Co-operative Credit Union (NCCU) were preparing to welcome customers on Wednesday (Jan. 3), the first official working day of 2018.

Even before the doors opened at the new site, the Ingle Blackett Building, on the corner of Featherbed Alley and Chapel Street (opposite the Charlestown Methodist Church), scores of customers had assembled just outside the main entrance. While many were there to carry out business, others simply wanted to observe the new space.

They were greeted with bright smiles and warm personalities and were directed to the various departments.

“It’s been long in coming,” he said, adding that “We’ve been planning for it for quite some time and I believe it took about two years to get to this point. We actually are not 100 percent complete but we just thought we had to move. We will finish the final touches by the end of January.”

When asked about the members’ feedback on opening day, Newton replied, “Members are excited. They gave us a lot of suggestions [and] they made positive comments. Some people came to the office yesterday (Wednesday) just to see what the place looks like and I’m happy for them. As a matter of fact, one of them told me this morning, I could see where my dividends went.”

The NCCU ceased operations at the former site shortly after 1pm on Friday (Dec. 29) and by 8:15am on Wednesday, the first customer was being served. General Manager Newton said that could not have been possible without the collaborative work of many individuals and businesses.

“The Project Manager was Hon. Spencer Brand, before he became the Parliamentary Representative for the area. The main contractor was Meredith Hendrickson of Hendrickson’s Construction. Then we had a number of subcontractors; Wilson Grant and his team of Grant’s Electrical and Plumbing Services; for the air conditioning system, it was The Finished Touch, Leon Lescott and his team. The tellers’ counter was done by Mr. Clifford Parry of Parry’s Woodwork in Hamilton and the countertop, which is the corian work, was done by Vance Allen. We had cleaning services done by Ricky Hill. Justin Skeete and Presidential Inc. did the security and data networking. The mover was Chaz Taylor.”

“We had to work together over the weekend to get this thing done. It was an arduous, difficult task and I think most of the nights, we left here at midnight or around midnight, from Friday night until Tuesday night. A lot people, even some of the contractors, did not believe we can make it for Wednesday morning but we had no choice. From the time we disconnected over there, we had to open over here and so, if we needed to go 24 hours, that was what was going to

happen. Thanks to the contractors and subcontractors because we couldn’t do it alone. I must say special thanks to Julian Nisbett, who ably assisted me with coordinating the technical aspect of the work.”

The NCCU first opened its doors on July 25, 1972 on Main Street in Charlestown, Nevis. The institution operates on weekdays from 8:15am to 3pm on Mondays to Thursdays and from 8:15am to 4pm on Fridays. Its mission is “to deliver financial products and services that consistently exceed the expectation of members.”

Doing business with the Nevis Cooperative Credit Union gives you more advantage than other institutions. Best of all, you’re a part owner of the credit union-which means that earnings are paid back to you, not stockholders. We offer higher dividends and low interest rates. NCCU is a not-for-profit organization that proudly serves the community and supports local organizations throughout Nevis. 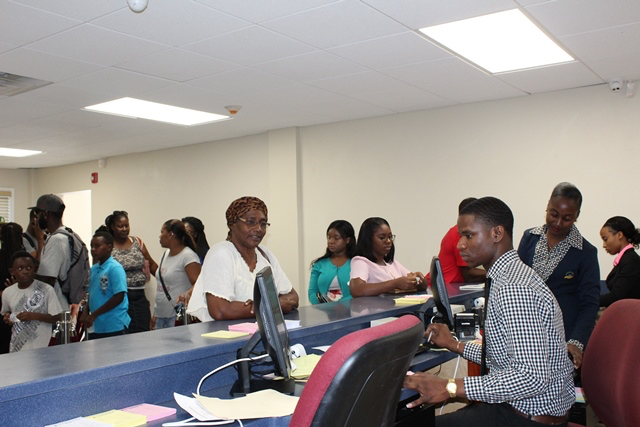