NIA CHARLESTOWN NEVIS (JULY 25, 2013) — Deputy Premier and Minister of Health in the Nevis Island Administration (NIA) Hon. Mark Brantley, has reiterated the Administration’s continued commitment to invest in human resource development in areas of health in an effort to combat both communicable and non-communicable diseases by 2015. 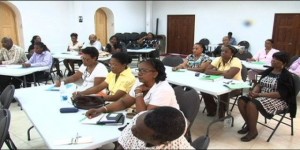 His comment came when he delivered remarks at the start of a one-day workshop on July 24, 2013, at the St. Pauls Anglican Church Hall for 27 health sector participants on Tuberculosis (TB) Guidelines. The short course was sponsored by the NIA in partnership with the Caribbean HIV/AIDS Regional Training Network (CHART) and the Pan American Health Organisation (PAHO). The training was geared towards the prevention, treatment and care of Tuberculosis and Tuberculosis-HIV.

“This Administration places its commitment on record with respect to the management of TB. We understand that the nation’s financial wealth depends on the health of its most valuable asset, its people. We also recognise that the world is a global village and as we continue to receive visitors from around the globe, we must remain vigilant to the development of our Port Health Programme which requires the strengthening of core capacities in surveillance, response and preparedness in order to prevent the re-introduction or, indeed, the introduction of emerging and re-emerging diseases.

“We will, therefore, continue to invest in human resource development, laboratory strengthening and other aspects of health-system development, which will contribute to the attainment of Millennium Development goal 6 which is ‘Combat HIV/AIDS, malaria and other diseases by 2015’. Please note that tuberculosis is included in the category of other diseases,” he said.

Mr. Brantley stated that while the Administration recognised that the burden of diseases reflected the greatest prevalence of non-communicable diseases, among them, diabetes, hypertension and cancer, it was cognisant of the need to equip clinicians with the skills needed to manage communicable diseases such as TB.

He noted that the Public Health System and its immunisation programme had effectively addressed the issue of prevention which had resulted in a nominal number of cases in the past several years.

The Health Minister also pointed to the Mantoux test offered through the Public Health Department which provided screening services for latent TB and the provision of effective care and treatment services by the Alexandra Hospital for communicable diseases such as TB.

Mr. Brantley explained that a growing number of TB cases in the Caribbean region was real for a number of reasons, including the high prevalence of HIV/AIDS and spoke to the implications for health professionals on Nevis.

“We are told that one-third of all persons with HIV are also affected with TB. At the local level, we on the island of Nevis are also faced with the possibility of managing this disease amongst persons registered in our HIV/AIDS Care and Treatment Programme.

“It is imperative, therefore, that all doctors, nurses and other health professionals including pharmacists, lab technologists, environmental health and health promotion officers strengthen their knowledge in this area,” he said.

The Health Minister thanked the co-sponsors of the workshop and expressed hope, that at the end, participants would have a better understanding of what it required to effectively treat Tuberculosis and Tuberculosis-HIV and ensure that St. Kitts and Nevis remained as TB-free as possible.
END