Charlestown-Nevis—A brief but impressive ceremony took place at the Cotton Ground Community center on the evening of Saturday 29th August.That is when the Nevis Nationals, Citizens and Friends society was officially launched.

The ceremony which was chaired by President Fr. Rolston Deson, commenced at about 6.30 pm.Preliminary items included the rendering of the national anthem, scripture reading and the invocation by Canon Ernest Flemming.

President Deson indicated that the society which owes its foundation to returning nationals, is open to all and sundry, hence the emphasis on NATIONALS, CITIZENS and FRIENDS.He noted that the main focus of the society was on giving back to the community and helping persons in need. Finance would be achieved through fund raising efforts and donations.Other members of the executive committee, elaborated on certain aspects of assistance to be provided by the society:

Mr. Sylvester Huggins elaborated on the proposed ‘good conduct awards’ which will be open to all of the primary schools on the island and the Cecele Browne Academy. One person from each school will be awarded a scholarship based on their good conduct as assessed by Teachers at the respective schools.

Mr. Ray Brantley spoke to the society’s commitment to assist the Nevis Youth Academy and Mrs. Cecile Daniel spoke about special community awards which will be given from time to time to deserving persons within the community.

Ms Gatree Dookran, a Guyanese national is a reflection of the diverse make up of the society and she spoke to the aspect of TOGETHERNESS and one of the objectives of the society in creating a unified island community.

Mr. David Daniel who is responsible for Pastoral care pointed out that the society will seek to meet the spiritual needs of its members and by extension, the members of the Nevisian community.

Rich entertainment was provided by Dikembe Morton and his drumming crew, along with the dynamic Frank Mills in song and on his guitar.The featured speaker was Mr. Elvin Bailey who spoke on the topic: “Multicultural and interdependent Nevis.’

He pointed out that Nevis has changed throughout the years and now consists of a diversity of cultures which have for the most part assisted in the positive growth and development of the federation.

He noted that current statistics are indicating that persons from no fewer than 25 different nationalities have applied for work permits in St.Kitts for the year so far.

After a brief question and answer period, the persons present were treated to snacks.

Charlestown-Nevis—The thanksgiving service for the life of the late Cecil Lester Sutton was held at the Manning’s Seventh Day Adventist Church on Sunday 30th August.Hundreds of family members and friends were in attendance in support of the grieving family.

Glowing tributes were paid to the deceased 74 year old educator who taught in primary schools throughout Nevis for some 38 years.He also became an established electrician in his retirement years and a renowned musician who mastered the keyboards.

Two of his off springs in the late Michael Herald Sutton and Daron Sutton also established themselves as accomplished musicians, with the late Michael Sutton going on to attract world wide acclaim for his musical genius, which all started at the hands of his humble dad.

Musical tributes were paid by some of the top gospel groups and individuals on the island. These included: The Gingerland SDA church; the Charlestown SDA church; the Brown Hill SDA church; the Nevis Community Chorale; persons who were taught by him to play the keyboards and Carmella Lawrence.

The eulogy was jointly presented by Mrs. Janice Sutton-Tyson who spoke to the exploits of Cecil Sutton the community man, family man and a missionary for Christ and daughter Taffae Cadean, who spoke to his excruciating journey after he was diagnosed with cancer and the tremendous ways in which God helped him and the family throughout the crisis.

The sermon of the day was presented by the renowned evangelist, Pastor Roosevelt Daniels who was not only born in Butler’s village but was even more significantly, introduced to a life in Christ by the deceased.

The emphasis of his sermon was geared to the persons present as he urged them to seek salvation urgently as a life outside of Christ means HELL and eternal destruction.

The body of the late Cecil Lester Sutton was interred at the Manning’s Seventh Day Adventist church cemetery. 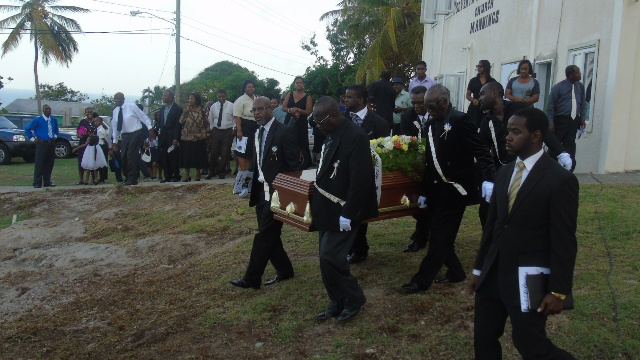