‘Nobody told us about the coronavirus pandemic’

In 2017, Elena Manighetti and Ryan Osborne decided to take the plunge many dream of – they quit their jobs, bought a boat and decided to travel around the world.

They asked their families to keep in touch, but with one rule: no bad news.

The couple, who lived in Manchester, were travelling across the Atlantic ocean from the Canary Islands to the Caribbean last month when, unbeknownst to them, a new and deadly coronavirus was spreading across the world.

After 25 days at sea, and with little communication with the outside world, the couple planned to dock on a small island in mid-March.

But upon getting phone signal while still off-shore, they discovered the island’s borders were closed and found out the world had been suffering from a global pandemic they’d heard nothing about.

“In February we’d heard there was a virus in China, but with the limited information we had we figured by the time we got to the Caribbean in 25 days it would all be over,” Elena says.

“When we arrived we realised it wasn’t over and the whole world had been infected,” adds Ryan.

‘Borders closed’
The couple had mostly been out at sea when the coronavirus outbreak began. With limited access to the internet and contact from family and friends, the pair had no idea how serious it had become.

“We told our shore contacts we didn’t want to hear any bad news, which was a difficult job as it was pretty bad news,” says Elena, whose family is from Lombardy – the worst-hit region in Italy.

“We first attempted to land in one of the French territories in the Caribbean but when we arrived we found all the borders were closed and the islands were closing down,” Ryan says.

“Even at that point we assumed it was a preventative measure due to the high season. We thought the islands didn’t want to run the risk of a few tourists infecting the locals.” 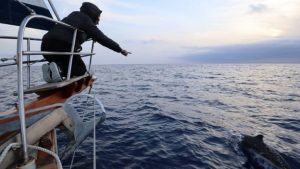 Back on their boat, the couple diverted their travel to Grenada and finally hit an area out at sea where their 4G was good enough to find out what was happening.

It was at that point they started to understand the magnitude of the virus.

“A friend of ours was already in Saint Vincent, which is where we were aiming to head. We managed to get in contact with her 10 hours before we were due to dock.

“She told us we were going to be refused entry as I’m an Italian citizen, even though I hadn’t been to Italy in months,” Elena says.

Luckily, the couple had been tracking their boat via a GPS signal.

They were able to prove their travel history, which showed that not only had they not been to Italy in months, they had also been in isolation for 25 days at sea. They were finally able to stand on dry land.

‘Dad told me not to panic’
Both Elena and Ryan have found it difficult to hear how the pandemic has affected their families.

“My hometown is in the Italian region of Lombardy which has been one of the worst affected in the world,” she says. “Ryan and I hadn’t realised how it had affected our families until we docked and I managed to call my dad.

“It was a hard conversation. He told me to not panic but our town had been one of the worst affected areas globally. He sent me a New York Times profile on our hometown, which made it all feel suddenly real. I was shocked.

“It’s a very macabre picture at home, there are no more coffins, no more cemetery space or room in the crematorium. My family is thankfully safe at home and have been in lockdown for over six weeks, but people we’ve known for years have died.” 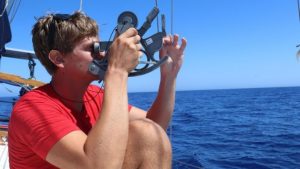 At the moment Elena and Ryan are safe in Bequia, Saint Vincent, but are worried about how long they’ll be able to stay there.

“We don’t want to leave Saint Vincent for now as nowhere is open,” says Elena. “We’re sitting tight for the time being with the aim of getting out before hurricane season starts at the beginning of June.”

Their hope is to then travel north and continue exploring the Caribbean.

But for now things look uncertain, she says, adding: “We’re sandwiched between the hurricane season and the virus.”