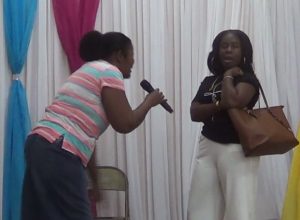 Jessups Village –Nevis-An old fashioned tea meeting was held at the Jessups Community Center, on Friday 12th July.
The session was coordinated by Permanent Secretary in the Ministry of Social Development, (which also includes the Department of Culture), Mr. Keith Glasgow.
It was his brain child, to reenact a critical part of our traditional cultural happenings that were a norm during the ‘good ole days.’
It was explained that a tea meeting was a time in former years, when the villagers would get together at a particular venue and share poems; stories; jokes and just had a good old time, while sipping tea and eating cakes etc.
Also on hand to thoroughly enjoy the evening’s performances, was Minister of Culture, Hon. Eric Evelyn.
The proceedings were ably chaired by Mr. Chesley Manners, who kept the audience in stitches throughout.
A grand entrance was made by Jogo’s big drum, accompanied by the reigning Mr. and Miss talented youth winners of last year-Tesean Newton and McKelsya Arthurton.
The Poets who featured on the program included: Chesley Manners; Curtis Morton Sr; Earl PANCHO Morton; Hanzel Manners; Monique Washington; Sherril Sutton and Richard Galloway.
There was a dramatic presentation by Ms. Yvette Inglis and Jameika Morton and songs were rendered by King Hollywood; Ms. Felecia France; King Invincible and King Delly Ranks.
There were also dances by the St. Thomas’ Primary School; Elite Dance Theater and Nykeisha and company.
Add to that, modelling by the St. Thomas’ models and Denesia Smithen.
There were also hilarious folklore performances by the popular SWEET LEMON; David’s Dynasty and the St. Thomas’ Japanese Girls.
There were also musical renditions by Keithly SNOWFLAKES Brandy and company and the renowned SUGAR HILL STRINGBAND.
Persons attending were also served a delectable menu which included a wide variety of traditional local foods, such as: Cassava bread (sliced); baked chicken wings; coconut tarts, served with bush tea or salt fish; bread rolls; vegetable quiche; and fine cake, served with either sorrel or passion fruit drink.
There was also a limited amount of Goat water as well.
Mr. Glasgow was extremely pleased with the top class performers on show and noted that the crowd was not quite what he expected but thought that it was fair, as there were competing events that same evening.
Those included a Principal’s dinner hosted by the Education Department; a Shekhinah Dance production and a Glow FET.
He however opined that next year’s event will be even bigger and better, as the goal of making persons more aware of the traditional meeting, was definitely achieved.