Passport Case Brought Against Dr. Douglas To Be Thrown Out 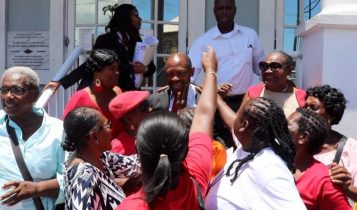 Today Friday June 15, 2018 turned out to be a very successful day in Court for the Rt. Hon. Dr. Denzil Douglas and his legal team as lawyer for the claimant Tony Ross QC floundered in Court on very basic legal questions posed to him by High Court Justice Trevor Warde. Tony Ross, a hired gun by the Dr. Timothy Harris administration who it is said has sought to engineer a case that is dead on arrival was visibly unprepared leading one observer present at court to remark that ‘QC’ in his case must stand for ‘Questionable Competence.’

The hearing on the case before the court today revolved around three critical matters:

1. Whether the case brought against Dr. Douglas by Cuthbert ‘Big Chief’ Mills could be consolidated with that brought by the Attorney General. Dr. Douglas’ counsel argued that Section 36 (4) of the Constitution prevents such a consolidation and that Big Chief’s case, when stripped to the core, has no serious basis and should in fact be thrown out. Lawyer for Big Chief, Tony Ross QC, struggled to offer a sensible explanation to the Court when asked for his interpretation of Section 36 (4) of the Constitution. Tony Ross who appeared very much out of his depth seemed to suggest in his circuitous arguments that the National Assembly Elections Act trumps the Constitution. This is a most ridiculous claim that even the lay man frowns upon. On July 6th, the judge will hear Dr. Douglas’ arguments as to why Big Chief’s case should be dismissed and not be allowed to waste taxpayers money to pay Tony Ross nearly $2 million.

2. Whether experts in Dominican law are required to interpret the matters as they pertain to this case since the passport in question is a Dominican passport. Tony Ross, much to the dismay of many observers, has offered a practitioner in Family Law and Mediation in Dominica as an expert in Dominican Constitutional Law. This is like hiring a carpenter when you need an Electrical engineer. The trouble is, Tony Ross can find no real expert who is prepared to support his baseless claims against the Rt. Hon. Dr. Denzil Douglas.

3. Whether Dr. Douglas’ affidavit in support of his case should be thrown out. Lawyer for Big Chief argued that he is entitled to see Dr. Douglas’ passport. Justice Trevor Warde inquired of him what the real purpose was since the evidence is already in as to the facts surrounding the Dominican passport. Tony Ross could offer no serious response as to why Dr. Douglas should hand him his passport to assist him (Tony Ross) in his baseless case. Even a tamarind tree lawyer knows that the accuser must prove his case and should not depend on the accused to assist him. It is trite law. On another note, Tony Ross QC argued that Dr. Douglas’ affidavit was filed late but Star of the Day, Counsel Angelina Gracy Sookoo-Bobb labeled Tony Ross’ position disingenuous because the date on which Dr. Douglas filed his affidavit was agreed upon by lawyers on both sides.

Today was a good day for justice for Dr. Douglas, who in speaking on the steps of the High Court immediately after the conclusion of the case, told scores of supporters who gathered around him that he would not only win the legal case, he would also win the general elections whenever they are called.