PEP Festival showcases training and skills acquisition of over 2,500 participants in more than 24 disciplines 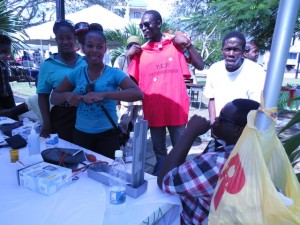 “It’s totally disgraceful and inhumane to tell people in St. Kitts and Nevis and beyond that this Labour Government, is only training people to cut grass under the PEP,” said Iclima.

“No wonder Unity wants to close down the PEP. They are afraid of our young people learning new skills and earning a decent living,” said Viola.

“I am a skilled landscaper. I take my work very seriously. After work, I do private jobs every day. Now that the rain is coming we are in demand to keep the grass green spaces in yards low. I have learnt to prune trees (and) to shape trees. Why would they (opposition parties) turn their noses on us? Our job is just as good as yours and the man or woman in the bank, in the offices,” said a young man who gave his name as Jaren.

“We are employed. We can now put food on our table for our families and get the things we want just like them. PEP is helping us to stay out of trouble. Why would they want to stop it or for it to fail or be stopped,” said Larry.

Many, many patrons expressed confidence that the PEP, launched by St. Kitts and Nevis’ Prime Minister, the Right Hon. Dr. Denzil L. Douglas last December, was indeed a good programme and were of the view “that it was time persons, including politicians to stop lying and talking bad about the PEP and that PEP is only teaching people to cut grass.”

“PEP is really a blessing. Look at all the skills, training and professionalism being exhibited here today,” said Marva.

“I know lots of people are doing office work, creating things on the computer in companies in Basseterre. Some, in fact, many of them are more dedicated and more productive than the permanent workers,” said Janice.

Visitors, including tourists from a cruise ship in port, enjoyed several of the foods and drinks on sale.

PEP administrators are elated that the PEP Festival left an indelible mark on hundreds, when they turned the Independence Square in Basseterre into the home of one of the best expositions the Federation of St. Kitts and Nevis has ever witnessed.

“I would dub the entire event as a showcase of success as it was in fact dubbed,” said PEP’s Project Manager Mr Geoffrey Hanley. “The PEP Festival brought a sense of satisfaction and pride, knowing that the energies that the facilitators have been putting into the participants and the responses that they would have been receiving, the evidence was clear as a crystal ball that PEP is really a blessing.”

“Impressive. SKN leading the world in youth employment preparation. Now for the entrepreneurs lead and small business to emerge as the SKN main economic driver.”

“Awesome! PEP in the Independence Square, so very. Much talent, in our beautiful Federation, We got it. Keep up the good works PEP workers.”

“This is good. It helps the youths to understand that they can do it if they try everyone has potential to reach to greatness if they let themselves do it.”

A PEP statement noted the different disciplines of the People Employment Programme had set up booths at the square, to showcase what they have done, and according to most observers, they did more than was expected of them and claimed that they now fully understood what the programme was all about and wished it luck in its endeavour to empower the Federation’s youth.

“Many would have indicated that they have never seen an event like this, so successfully handled and presented, and as you walked around, you got the sense of pride that the participants put their all into the work that they had on display,” said Mr Hanley.

Persons of all persuasions and all ages took time to visit the exposition and all had a story to tell. As Mr Hanley had earlier predicted, the cosmetology booths stole the show as people young and old, males and females queued to have facelifts, pedicures, manicures, hair done, nails, and everything else they wanted. Their verdict was that the PEP participants have picked up more than a skill in the short training period under the programme.

Minister of Health, Community and Social Development the Hon Marcella Liburd was one of the persons who toured the various booths. She was more attracted by the Early Childhood Unit’s booth where a model daycare centre was in place and she took time to talk to the preschoolers at the booth, after she was given a guided tour of the booth.

“It (the festival) was an excellent idea and I think it really showed the people of St. Kitts and Nevis how many good things PEP has done for the young people of St. Kitts and Nevis,” said Hon Liburd. “I really hope that they will take the training that they are getting to another level, so that at the end of the day they are able to become self employed, be able to start their own little businesses individually or in groups in order to benefit themselves and their families.”

One of the areas the People Employment Programme has broken new grounds is in the area of health, where it has trained 29 nursing assistants, and for the first time in the history of the Federation the batch trained had male participants, who graduated with flying colours. The group had four males, who are now employed by the Institutional-based Health Care Services as Psychiatric Aides.

The PEP-trained nurses had a booth where among other things they made blood pressure checks and among those who came for the service included the PEP Project Manager, Mr. Geoffrey Hanley. At the time he was at the booth, the Federation’s Chief Medical Officer, Dr. Patrick Martin was at the booth, after having toured the entire exposition.

“I understand that there are persons who have decided to enter the nursing profession through the PEP door, and that is a very good thing because, you know nursing entry standards have been set, have certain subject requirements, but subjects do not make a nurse.”

Stating that some of the best nurses he would have worked with came through the ranks starting as nursing attendants rising to nursing assistants and finally become registered nurses. He concluded: “So the People Employment Programme is an entry level position; it must continue, in terms of making sure that our nursing roles continue to be replenished.”

All the sections of the PEP participation at the exposition had their unique aspects that attracted persons who visited the different booths. The hospitality team had to race with demand as the food they prepared was in great demand. Cakes made by the PEP secretariat staff run out long before the festival came to an end…. but at the cosmetology booths, not even time could stop patrons from coming for services offered.