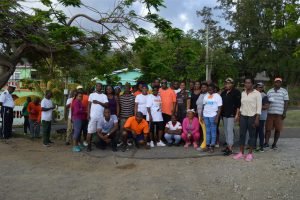 BASSETERRE, ST. KITTS, April 30, 2018 (PLP PR Media Inc.) — While deriving health benefits the Peoples Labour Party/Prime Minister’s Health Walk offers each last or first Saturday of the month that it is held, many health conscious walk enthusiasts are now looking at it from a competitive angle.

Participants are drawn from all parts of St. Kitts, and members of an elite group of walkers have each month been plotting to outdo each other as to who gets to the finish point in the top position. The latest health walk took place on Saturday April 28 in Constituency Number Seven starting from Belle Vue, and Damien John got to Ottley’s Hard Court in top position.

Coming in second position is a perennial top finisher, Patrick Adned, and right behind him was 10-year old Edward Williams from Constituency Number Five. The young walker was second placed in the last walk. In the fourth place was Vernon Henry and fifth placed was walk veteran and Peoples Labour Party Founding Member, William Phillip.

There was quite some excitement as PLP’s Deputy National Political Leader Hon Akilah Byron-Nisbett walked in still looking fresh at position six, closely followed by Aba Webster of Constituency Number Four in the seventh place. Breathing behind their backs was another of the elite walkers, David Webster, also from Constituency Number Four, and behind him was PLP’s Women’s Arm Representative Sonia Henry.

A large number of walkers had assembled at the Belle Vue bus stop from as early as 4:45 am, but the walk started shortly after 5:30 am following a prayer by Sonia Henry. Participants were excited by the usual presence and participation of the PLP’s National Political Leader, Dr the Hon Timothy Harris, who initiated the event ten years ago in his Constituency.

Prime Minister Harris, who is also CARICOM’s lead spokesperson on human resources, health and HIV matters, has been using the monthly event as a way of fighting the scourge of NCDs in a practical way, and hence its national appeal as it has been attracting participants from outside his constituency. The monthly health walk was last year given a national outlook when the Peoples Labour Party took over the organising of the event.

Following the rebranding of the event to the Peoples Labour Party/Prime Minister’s Monthly Health Walk last year, a number of walks were held outside Constituency Number Seven. They drew record numbers in terms of participation especially the walk held in Constituency Number Six last November.

The walkers who were on Saturday treated to a healthy light breakfast by Yvette Bass at the Ottley’s Hard Court are looking forward to hear the announcement of the next PLP/PM’s Health Walk’s date and venue. 10-year old Edward Williams has already started training for the next event where he hopes to arrive at the finish point in the top position.