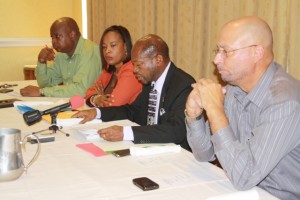 “I am on a mission to hand over the leadership of our country better that when I received it for I am very much convinced that my government has assisted in transforming the lives of our People,” said Prime Minister Douglas said at the Breakfast Meeting at the St. Kitts Marriott and Royal Beach Casino.
Representatives attended from several organisations including the St. Kitts and Nevis Chamber of Industry and Commerce, the Hotel and Tourism Association, the Evangelical Association, the Contractors Association representatives of banking and other sectors.

With a few days away from the presentation of the Budget, Prime Minister Douglas St. Kitts and Nevis said:
“We have reached a long way from where we were and as the financial secretary has outlined that the prospects for overall growth are very promising and it is anticipated that our Federation will return to positive growth levels around 1.9 in 2013, this year.”

“I want to emphasize that we are very fortunate that notwithstanding the very unfavourable global economic environment, our tourism sector in particular continues to attract very significant investment in tourism related facilities and infrastructure. We have seen a number of investment projects which we have rolled out, even though we had not had the opportunity to be in Parliament for the Budget.”

Dr. Douglas, who is also the Minister of Finance pointed to several projects including the Christophe Harbour Development which is continuing despite some internal problems with owners of the project.

“The Park Hyatt, which is part of the Christophe Harbour Development, we are going to be breaking ground for that at the end of May. The Kittitian Hill is continuing and it is now set to be opened in November of this year and at the moment we have no less than 300 people working at that site, a place that is in the heart of the Sugar Belt where our detractors again was saying that I was dreaming in trying to develop tourism in that part of the country which had been hardest hit by the closure of the Sugar Industry in 2005.”

“We have also launched and participated in the ground breaking exercise for the Imperial Golf and Bay Beach Resort. We have also broken ground for the Golden Rock Commercial Development Park that is also on-going just outside of Conaree and very shortly, there would be an announced date for the ground Breaking Ceremony for the Koi Resort as well,” Dr. Douglas told the representatives of the social partners.

He noted that it was only 2 to 3 weeks ago, the Ross University broke ground for an EC$67 million expansion.

“The construction sector that has been a major growth area in the economy as well; In fact we want to thank in particular the SIDF, which has come on-board as a social and economic stimulus partner that has provided so much support in so many different sectors of the economy in attempting to stabilise the social problems and economic situations and provide important capital where needed to help stimulate the economy.

“I want to say that you must be aware that there is an initiative that is being provided for a reduction in taxes applicable to building materials for the first home owners construction projects valued up to 400 thousand dollars. This is strongly linked to the government’s commitment to empowering our people through land and home ownership,” said Dr. Douglas, who was supported by Cabinet ministers and technical staff from the Ministries of Finance, Her Majesty’s Customs, Inland Revenue and Sustainable Development.
He said that a few weeks ago, he toured the Dale Mountain area just outside Keys traveling across the mountain going to the top of Gun Hill and then coming down into St. Peters.

“We want to thank Social Security for opening up that path which then opens Dale to further development and government to make these lands if possible to the Social Security Board.

“We will use the millions of dollars that would be derived there from to put infrastructure into several housing development projects, especially in West Farm where we have given out no less that 500 house lots. Also in the White House Gardens area where we need to put in the infrastructure as well as several of our housing development sites so that our people could start to build and thus generate the economic activity that we believe is absolutely necessary in moving our country forward,” said Dr. Douglas.

The commercial farms have been identified as very critical to the increase in food production and security in the agricultural sector and we want to emphasise that this sector is going to further demonstrate not only the diversification of the economy, but also further diversify the food products available to our people and to make sure that the government provides the necessary facilitation that is going to be necessary in the establishment of a new Agro Processing Group; The St. Kitts Agro Processing Cooperatives.

“And I link this very quickly with tourism. We had just last week started phase two of the Agro Tourism Project that is situated outside of Sir Gilles in Sandy Point and Newton Ground, where over US$3 million has already been expended in developing this project.

“Not only expanding the tourism plant and product that we have here in St. Kitts and Nevis, but yet again providing that very vital and important link between tourism and agriculture which are the two leading productive sectors in the new economy that we are trying to build,” the prime minister said.

He referred to the important area of renewable energy, especially the start of construction of the first one megawatt solar farm in the Eastern Caribbean at the Robert L. Bradshaw International Airport.

We are also emphasising that this new phenomenon of energy must become the ordinary way of producing energy for our people. And so we are continuing to gallop very speedily on providing the solar farm at the Robert Llewellyn International Airport where we would have 1 megawatt of solar energy produced into electricity, which will electrify the airport and the balance fed into the National Grid either free of cost or a set off against maybe the energy bill that SCASPA may be providing in other parts of its operations,” said Prime Minister Douglas.

“This is to impact positively as well with the commercial sector and again we are asking the commercial sector to ensure that you utilize very wisely the very lucrative support and incentives that has been provided by the government in order for you to generate electricity much more cheaply and thus cut back on your fixed costs in your operations and thus increase your potential profits in your business operations,” said Prime Minister Douglas.