PM Douglas: “Timothy Harris is the mastermind behind the Motion of No Confidence”

BASSETERRE, ST. KITTS, APRIL 19TH 2013 (CUOPM) – The mastermind behind the No Confidence Motion Against the Government of the Federation of St. Kitts and Nevis, is Dr. the Hon. Timothy Harris, former senior minister in the Cabinet of Prime Minister the Rt. Hon. Dr. Denzil L. Douglas. Dr. Harris is also Chairman of the governing St. Kitts-Nevis Labour Party. 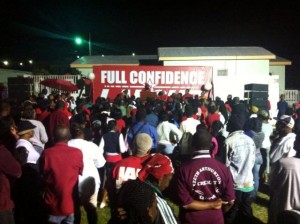 This was revealed by Prime Minister Douglas during a political meeting in St. Peter’s Thursday night.

Dr. Douglas told the large crowd that the Motion was only submitted by Leader of the Opposition in the National Assembly, the Hon. Mark Brantley.

Dr. Douglas stunned party supporters when he revealed: “I am telling you tonight and I challenge Timothy Harris to respond tomorrow (Friday) and for the rest of the week on WINNFM and Freedom FM. Tell him I say, that he is the one who masterminded it (the motion of no confidence motion.).

“The Sunday before the Wednesday, Timothy Harris phoned a (ALP) Parliamentarian in Antigua and Barbuda and ask him to send him a copy of the Motion of No Confidence that they had placed against the (UWP) Baldwin Spencer Government in Antigua,” Dr. Douglas told a stunned crowd.

In announcing his dismissal, Prime Minister Douglas said it had become quite clear that Senior Minister Harris does not regard himself as being bound by the collective responsibility of the Cabinet and this could become disruptive to the smooth flow of government business.

In fact, based on my interaction with the Senior Minister Harris in recent months, I have formed the view that the Senior Minister will not participate meaningfully in the Government unless he is appointed Prime Minister. However, the Labour Party is a longstanding institution with strong democratic traditions that outline the processes by which one moves into a position of leadership in the Party. It is not within my power to grant Party leadership to anyone. It is the members of the Party that must do so. Similarly, it is not in my power to leave position of Prime Minister in my Will or to give to whomsoever I wish. The Prime Ministership is not of a Dynasty or Monarchy. The choice of Prime Minister rests in the hand of the people of this country,” the Prime Minister told the Nation.

He noted it is completely within the right of the Senior Minister Harris or any Member of Parliament to hold and express views contrary to the Government or the Party of which he is a part. The Constitution provides for freedom of speech and it is not my intention to muzzle anyone.

He said the dismissal of Minster Harris became necessary because of the need to ensure that the Government continues to function smoothly and that the investment climate is not unduly affected by the political manoeuvring that had become evident in recent months.