Police refusing to give opposition permission for public march

Basseterre, St. Kitts, Wednesday, 19th June, 2013 – The decision of the Police Commissioner in St. Kitts and Nevis, CG Walwyn, to deny a request from the opposition People’s Action Movement, (PAM), to hold a public march through the streets of Basseterre on Wednesday 26th June, 2013, is being viewed by the party as a deliberate effort to frustrate the wishes of the people and their rights to free expression and to demonstrate.
The People’s Action Movement is of the view that in this democratic society, it is an imperative for the police to act in a manner that may not be construed as showing bias or unjust conduct. 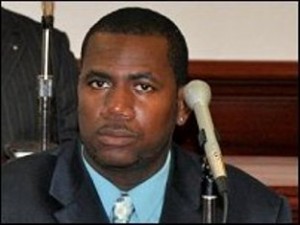 Reacting to the denial for permission, PAM’s leader, Hon. Shawn Richards, explained that it was back on Wednesday 29thMay, 2013, when PAM wrote to the Commissioner seeking permission for the march, and for many weeks the party had to be calling the offices of the commissioner to clarify if the matter had been dealt with, but they were constantly informed that no decision had been taken and that the letter remained on the desk of Mr. Walwyn.

Now, after almost one month of waiting, it was only on Wednesday morning (19th June), that a response was finally given. Richards indicated that they were made aware this morning when a staff member of the party’s secretariat visited the office of the commissioner, to deliver letters for two other meetings, un-related to the march. It was then that they were informed that no permission will be granted.

Richards stated that around 10:15am he received verification from his Secretariat that the commissioner of Police had responded indicating that permission for the march had been denied due to a lack of resources to police the march and also, at the same time, the activities surrounding the Music Festival, which kick off next week Thursday, 27th June, one day AFTER the march, on Wednesday 26th. Richard asked, “How can this therefore impact on the Music Festival activities?”

“I don’t think that the resources required would be more than a Labour Day march. This is not the first time that the Commissioner has taken such a position, because in the past we have been told that because cruise ships are in port, we cannot have a march,” stated Richards.

Richards continued, “Interestingly though, j’ouvert morning, for example, where you have thousands of persons in Basseterre, we also have cruise ships being docked in Basseterre and the police have not said to the carnival committee or anyone for that matter that j’ouvert cannot be held because cruise ships are in port and as such the police does not have the necessary resources.”

The PAM leader said that he finds the excuse that is being given by the police as being totally unacceptable. “The police as far as we are concerned have more than enough resources, probably too many resources. When it is convenient they can send police officers to press conferences where they have not been invited.” Richards was referring to the presence of two “Special Branch” officers at press conference on Monday17th June, 2013, to launch the new PLP party.

Richards also found duplicity in the commissioner’s decision because, as he said, “When the government is having public meeting they have persons from the army and police force in large numbers. When they have their town hall meetings it is the same thing with scores of security officers present. So it seems like the resources are only available when it is convenient for those resources to be available.”

“One certainly would not want to think that directives are coming from political sources, however I would hope that that is not the case, but we have to wonder if indeed it is not happening,” opined Richards.

Despite the decision of the police, the opposition party is still determined to show its objection to what the government has been doing and how it has been destroying the economy of the country and eroding the fabric of democracy.

“I have said to persons on my radio show this morning, “Moving Forward”, that while the police are saying that we are not allowed to have a march next week Wednesday, the alternative is for persons to come into Basseterre with placards and stand in different places around the capital, making known their feelings…for instance at the Ferry Terminal, Independence Square, outside of Government Headquarters, Fort Street and in front of the office of the Chairman of the Boundary’s Commission, Peter Jenkins.”

Richards believes that the chairman of the Boundaries Commission appears to be assisting the government. “As far as I am concerned Jenkins is an agent of the government who is helping an illegitimate and illegal government to change boundaries at the expense of the ordinary man and woman in this country…who want a change of government.”

The PAM leader explained that Jenkins is the Chairman for ZIZ Corporation and last year in December, the party sent a letter requesting to air a Christmas and New Year’s Day message and to date Mr. Jenkins has refused to respond to those letters. Interestingly though, he received a letter from myself as Leader of the People’s Action Movement, in regards to boundary changes, yesterday, (18th June), at a meeting of the Boundaries Commission and within less than an hour after that meeting finished, I received a response from that very same Peter Jenkins, because I guess he is now doing what favours himself and what favours the government.”

Richards also reminded that Peter Jenkins has been an executive member of the Labour Party, has served as the Chairman of the Port Authority, and enjoys numerous contracts from the present government.