Basseterre, St. Kitts,  (SKNIS): Post offices remain relevant and should embrace technology as a tool to enhance its operations.

That was the key message which emerged from the 16th annual Caribbean Postal Union conference held from June 10-14, at the St. Kitts Marriott Resort.

Lea Emerson, Executive Director of International Postal Affairs in the United States Postal Service, told SKNIS that like many countries around the world the USPS is facing many challenges that has resulted in a reduction of staff and hours of operations. 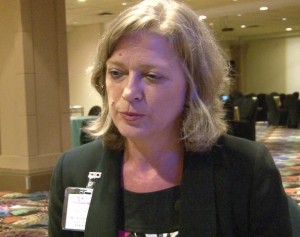 “The postal service has had to downsize because the letter volume is declining and most of our infrastructure in the past, all of these letter processing plants were all geared around letters and as those have declined dramatically, we are changing and consolidating our network,” Ms. Emerson said. “There are promising signs that the packages, express mail and other parts of our services are growing and that is helping to offset the decline in letters.”

Director General of the Universal Postal Union (UPU) Bishar Hussein explained that technology represents an opportunity for post offices to expand their services and increase efficiency. He said that rumours of the demise of post offices by advancing technology have been greatly exaggerated in the past.

“When the telegraph or telephones came in they thought the post offices were going to die,” he stated, adding that the same was repeated with the invention of fax machines and the internet which allows electronic mailing. “Over the years the post office has survived using the same technology.”

Mr. Hussein added that he has used his position as the head of the UPU to advocate for greater support for postal services as they provide a critical function in society.

“My wish would be to see that the postal network is viewed or appreciated by the member countries as a fundamental infrastructure for the social and economic development of nations regardless of their size,” he stressed. “So my priority here is to see that the agenda of the post office is taken up at the highest level of government. In fact this must come from the top of the presidency, right to the cabinet ministers and then to the post office. Everyone must appreciate the role.”

The UPU Director General compared the service of the post to that of other sectors including health and roads.