Basseterre, St. Kitts May 29th, 2014, (PAMCOM):- Deputy Political Leader of the People’s Action Movement Jonel Powell gave a commitment to what is being described as the most energized, Largest St.Kitts-Nevis Political Convention in recent history. The vibrant young, popular, charismatic Candidate for Central Basseterre declared to a packed to overflowing hall of PAM Headquarters that the People’s Action Movement in a UNITY Administrations will restore decency and to government. 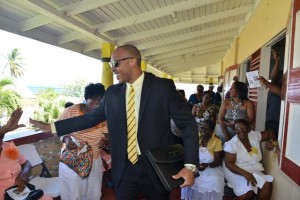 “The day will soon welcome the dawn of a new era when PAM in a UNITY Government will help to restore confidence, democracy, development, prosperity and decency for the people of St.Kitts-Nevis,” Powell stated. The energetic and popular new Candidate for the Central Basseterre seat also reflected on the glory days of the PAM administration.

Powell said “It was not to long ago that the halls of parliament were occupied by men and women of honor and decency led by the Father of our Nation the Rt. Hon. Dr. Sir Kennedy A Simmonds.”

The huge audience cheered in support and agreement with the exciting new Constituency #2 Candidate. Powell burst on to the political scene just about a year ago and has impacted the political landscape bringing a breath of fresh air with his new vibrant, honest brand of politics.

Powell’s impact had been so significant that a number of Polls have all shown that voters in the Central Basseterre seat favour Powell over incumbent Hon. Marcella Liburd as their next representative.

The Team UNITY Candidate for Central will be convening a special meeting of the PAM Central Basseterre Constituency Branch on Monday 2nd June, 2014, at 7:00pm, at the constituency office located on the corner of Cayon Street and Thibou Avenue.

The meeting is open to all residents of Central Basseterre especially supporters, members and friends of the People’s Action Movement , Team UNITY and any other person interested in the development of our country.

All are invited and asked to be on time to facilitate a prompt start at 7:00 p.m.