Powell on PEP: ‘Take the money and vote them out !” 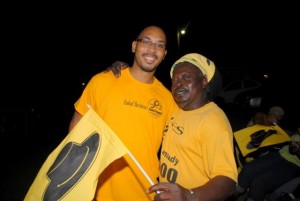 Powell pointed to past programs such as the Job Experience programmes just before the 2000 and 2004 elections the “YES” programme in 2009 which all share similar characteristics of being launched just before an election is held and a few months after elections the programs are closed down and persons are again out of work.

“In 2OO4 we had a government jobs programme leading up to election and then as soon as the election was over, so were the jobs. The same thing happened in 2009 with the YES programme and it is the same thing that will happen today in 2013. In fact one young man lamented to me that he was on the YES programme in 2009 and after that programme was over he has not found any employment until now with the P.E.P,” said the charismatic PAM Candidate for Constituency #2.

“Our young people deserve better. They deserve to be able to have the opportunity to be given permanent jobs. They deserve employment for more than just 6 months before an election every 4-5 years. These programmes including the current P.E.P are nothing more than Pre Election Ploys. I will however encourage all the young unemployed men and women to take these temporary jobs, they need the money in these hard economic times. Take the money to pay your bills and to support your family as best you can, but vote them out and ensure permanent work with a new brand of politics that I will be bringing with equal opportunity for jobs for all. The money is our money and our people have every right to it and it should not be used for political stunts to try and fool our citizens. But to all my young constituents take the money and vote them out. When you work in these short term programs, just think about the fact that this will only last until elections are over.

If you can vote for my opponent Hon. Marcella Liburd or Prime Minister Douglas to employ them for another 5 years, then shouldn’t you be entitled to work for at least another 5 years, 10 years or 20 years ? Your vote gives them 5 more years of a permanent lucrative job while they in turn are only offering you a job for 6 months. Think about it. They do not deserve your vote because they do not care about you. If they did they would initiate programmes and policies that will encourage and develop real jobs, permanent jobs and entrepernuarial opportunities for our young people instead of simply giving them jobs for 6 months leading up to an election,” Powell passionately declared.