(CHARLESTOWN NEVIS)- Premier of Nevis Hon. Vance Amory conducted a press conference on the morning of Monday 12, August 2013 at the Red Cross Building located on Chapel Street in Charlestown to give an account of his government’s first 6 months in office. 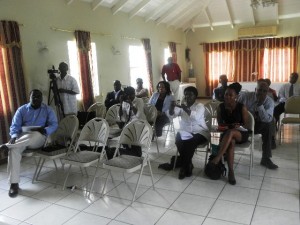 In his opening remarks, Premier Amory said it must be noted that his Administration inherited a very difficult if not impossible fiscal and financial situation. He stated that it is to the credit of the people of Nevis, who has shown an upstanding and continued support of the initiatives taken by the Nevis Island Government to keep the Nevis’ ship of state afloat.

The leader stated that in the last six months, he has chosen to dialogue and to seek the cooperation with the Prime Minister of the St. Kitts and Nevis. This was done to get a better and more equitable arrangement, for the people of Nevis and he will continue to seek that equity and collaboration as he views this to be necessary in order to provide service to the people of Nevis.

Mr. Amory claimed that good economic activity in Nevis, will be beneficial to both islands and any attempt to restrict development in either island will have a negative effect on the Federation. ‘We cannot afford for politics to get in the way of moving the country forward’, Mr. Amory said, noting that progress is far more important than politics.

He also spoke of the importance of local and foreign investment. ‘We are currently in discussions with at least three local businessmen, who will have a few projects on stream, the latest middle of next year’. The premier appealed and encourage local persons to keep investing noting that the government will do all it can to assist them. He indicated that the NIA understands the importance of the private sector and when help is required the NIA would offer that assistance.