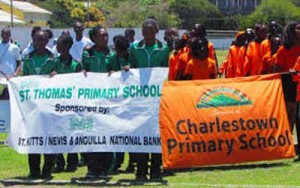 Coaches and teachers who are attached to the eight primary schools on the island are now gearing up and preparing the athletes for the 34th edition of the Gulf Insurance ‘Mini Olympics’ Primary School Championship 2015.

On Wednesday, April 1, 2015, dust, speed and athletic skills will be witnessed at the ETW Park as the reigning champions, the Charlestown Secondary School will be fighting to the very end to hold on to its championship title. The Elquemedo Willett Park will be transformed into a field of many colors with hundreds of patrons sporting the colors of their favorite school whether it is orange, green, purple, maroon, blue, baby blue, yellow or red.

The Mini Olympics Primary School Championship is said to be the biggest event in Nevis. This is when hundreds of people flock the ETW Park, to witness stiff athletic competitions. However, it is not everyone who attends the event pays keen attention to the sport. Many attend the meet to make a ‘fashion statement’. Clothing establishments are already receiving a “buzz” from patrons who are already looking for their ‘unique’ attire to attend the meet.

In the mean time, Head Coach, of the Charlestown Primary School, Elquemedo Willett is confident that his school will retain the championship.