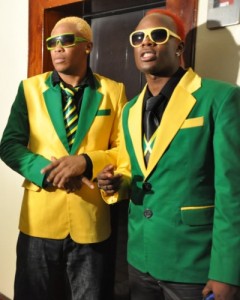 The event is highly hyped and all are invited as there would be games, a kids zone, dancing and ‘nuff drinks and nuff food’ as well as giveaways.

Admission to this event is ABSOLUTELY FREE.

RDX is currently tearing up the airways particularly in recent times.

From the moment International Recording Artiste RDX exploded on the scene with their chart topping single Dance in 2007, they haven’t looked back; indeed the energetic musical brothers have grown to become one of the most recognizable faces in Dancehall/Reggae the World over.

Singer DelomarX (Andre Bedward) and Deejay Renigade (Carlton Williams) were childhood friends, but merged their musical forces to become what it is today; which is the award winning… RDX.
They were crowned the Group of the year award for two consecutive years (2007& 2008), for their international acclaim of the hit song Bend Over, and went on to produce four more number 1 songs in Jamaica i.e. Daggering, Dance, Everybody Dance, Dancers Anthem.

Not to mention worldwide chartbusters including Skip (Poland), Movements (Poland & Panama), Deliver Me (Guyana) and For the Girls (Trinidad).

Add for those who think that they were just singers and deejays; they surely showed versatility by being able to deliver stunning performances around the globe including successful Tours of the USA, the Caribbean, Japan, Africa, Europe and Central America.

With these great and wonderful performances came a creative array of modern attire which they would express through their colourful personalities to match their hairs and professionalism and work ethic not often associated with that type of genre.

This has been the description provided to credit the acclaimed Dynamic Duo, RDX.

And with only little over six years of being in the spotlight, RDX have etched there name as one of the premiere standard bearers of quality music emerging from Jamaica, and are widely regarded as one of the positive ambassadors of the popular Dancehall culture.

With the creative lyrical prowess of Renigade and the infectious Melodies of DelomarX, coupled with thumping tracks and a forward thinking support team, RDX have been projected for even greater things.

And with the recent release of the smash hit Jump, that has captivated audiences globally, plus Summer Slap Weh, Jump & Broad Out; the growth and diversity of RDX has become even more visible to the point that the duo is now being thought of, incredible circles, as the next Dancehall/ Reggae Superstars.