(CHARLESTOWN, NEVIS)- The Nevis Reformation Party (NRP) has announced that there will be a massive meeting and rally in the heart of Charlestown this coming Thursday, February 12, 2015. The rally would also include a musical concert featuring Jamaican female artiste, ‘Cecile’ along with the Nu Vybes Band from St. Kitts. 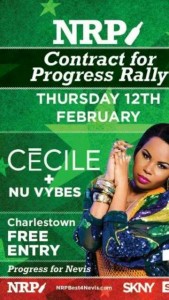 This event comes less than one week before the Federal Elections in St. Kitts and Nevis and would be dubbed, ‘NRP Contract for Progress Rally’.

The rally will be held soon after a political meeting on the same night featuring the political leader of the Nevis Reformation Party, the Hon. Joseph W. Parry and National Political Leader of the St. Kitts-Nevis Labour Party (SKNLP), Prime Minister, the Rt. Hon. Dr. Denzil L. Douglas. Other candidates from both parties who are contesting the Federal election on Monday, January 16, 2015 will once again meet on the same platform to speak to the people of St. Kitts and Nevis.

At the same rally Hon. Joseph Parry stated that the NRP and the St. Kitts-Nevis Labour Party have worked together for the benefit of the Federation. He also stated that both parties have learned to communicate.

“We have learned that the NIA and the Federal Government need to work together in harmony. We have seen the benefit of togetherness and what it can bring in terms of development in the economy and in democracy”, he said.