NIA CHARLESTOWN NEVIS (MAY 05, 2013) — Member of Parliament and Premier of Nevis Hon. Vance Amory, urged members of the public to attend a public lecture entitled “Bottom-Up; The New Caribbean Politics” by renowned Psychologist and Social Development Consultant Dr. Sharon-ann Gopaul-McNicol. The forum will be held at the St. Pauls Anglican School Room in Charlestown on June 10, 2013. 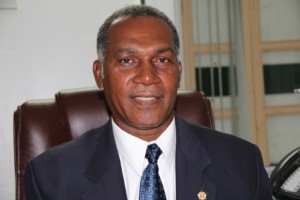 Mr. Amory said Members of Parliament (MP) through his instrumentality, invited the respected Trinidadian born, who resides in the United States of America, to the Federation for one week from June 4 to 11, because they felt there was the need to refocus.

“On Monday 10th of June an open forum will take place at the St. Pauls Anglican School Room at 7 to 9 p.m. I wish that many persons could come to be part of this discussion because it is important that we begin to have new approaches to our political development, so that the people who elect their governments are not left out of the picture and are only called upon to participate every five years when elections are held,” he said.

According to Mr. Amory, Dr. Gopaul-McNicol who is a psychologist in the United States and was a Consultant to the campaign of the President of the USA in the past two elections was developing a new thrust for political development called The Bottom Up Approach and would be engaged in a number of other consultations and public discussions on the model and consult with the public.

Mr. Amory explained the rationale behind the invitation and expressed his satisfaction with her acceptance of the invitation to visit the Federation.

“One of the issues at stake here is that political leaders tend to inadvertently distance themselves from the people who elect us and it is an attempt to re-establish this contact that Dr. McNicol has developed and is discussing this bottom-up approach to political development throughout the Region. I was happy that I was able to contact Dr. McNicol and get her to accede to visiting St. Kitts and Nevis,” he said.

While in the Federation, the Member of Parliament stated, Dr. McNicol will also be guest lecturer at the University of the West Indies Open Campus.
“During her visit she will be meeting with different groups the Chamber of Industry and Commerce; she will meet with representatives of the churches and other civil society groups. She will meet with other members of Parliament from the Opposition benches.

“She will also be the guest lecturer of the University of the West Indies at the Gardens on Thursday 6th June at which time she will give a public lecture on the model which she is developing to bring a new awareness to how the new thinking on political development in the Caribbean Region and certainly which could be used worldwide,” he said.