Basseterre, St. Kitts, Friday, 5th July, 2013, (PAM Communications Unit) – Riot police in St. Kitts on Friday evening dragged and beat the former leader of the opposition People’s Action Movement, (PAM), during a march that was sanctioned by the security forces. 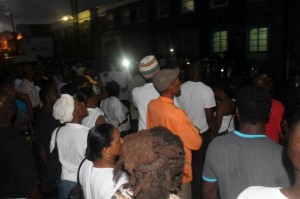 As the march approached the Church Street intersection with Central Street, former PAM leader Lindsay Grant, stopped in front of the police erected barricades, electing not to go beyond the “no entry” point. Then, in a rather bizarre move, one police officer in particular was seen to grab and drag Mr. Grant over the barricades, into the no entry zone. That officer, joined by others, proceeded to mistreat the politician, throwing him to the ground, assaulting him and pushing him into a police vehicle before taking him to the nearby police headquarters, located on Cayon Street.

Minutes after, hundreds of opposition supporters from various political parties, including PAM and the newly formed People’s Labour Party, PLP, abandoned their rally that was taking place on Bank Street, and headed to the police station, demanding that Grant be immediately released from detention.

As word spread across the island hundreds more headed to the capital, making their way to the police headquarters to join the others who started to sing the country’s National Anthem, while the riot police began their move to push the crowd away from the precinct. But the people were determined that they had a right to protest and that the police must release Grant without further delay.

Chants of “free Mr. Grant, free Mr. Grant” were heard amongst the crowd. Others sang songs of redemption and there was a chorus of “we will defend our democracy”. Yet there were those who made it clear that the illegal and minority government of Denzil Douglas will not be allowed to subvert the constitution and fundamental rights of the people of St. Kitts and Nevis.

While the police were intimidating and harrassing the opposition marchers, the same officers allowed supporters of the ruling party, dressed in their party colours, to occupy the steps of Government Headquarters, some with bottles and stones that they had earlier headed to the building, to pelt the opposition marchers as they traveled along the route. It was a similar technique used by labour supporters in 1993 when, as prime minister Douglas said in a recent radio interview, “overthrew the government of Dr. Kennedy Simmonds”, the country’s first prime minister.

It was just last week that an email was leaked from the Commissioner of Police, urging his senior officers to prepare “non lethal” weapons, to deal with the ordinary citizens of St. Kitts and Nevis, whom he ( the Commissioner) called, “INSURGENTS”. In that email, the commissioner had also made known his displeasure that his senior officers were not being strong and aggressive enough to “squash” the peaceful protest, of the people, although such activity is guaranteed by the constitution. It was indicated by some of those in the senior ranks of the police that they were not in favour of the brutal strategies that the commissioner wanted to execute, especially when he also urged them to prepare to make mass arrests.

Evidence has also surfaced to confirm that the police have been colluding with the government to deny the people their fundamental rights and the police commissioner has been seen attending conferences and meetings of the ruling Labour Party.

It has been over six months now since the opposition People’s Action Movement and Concerned Citizens Movement, CCM, filed a motion of No Confidence in the government and the prime minister, but the illegal prime minister continues to frustrate the will of the people by refusing to allow the motion to be heard. He has also warned the Speaker of the House that the motion should be allowed to be debated in the Assembly.

In addition, two former senior ministers of the ruling party, who have since moved on to form their own party, have written two letters to the Governor General, informing him that they will join the members of PAM and CCM in voting for the motion to rid the country of the government and prime minister.

The government has foolishly argued that because the opposition took the matter to court to force the administration to hear the motion, it could not be heard in parliament. Therefore, though PAM is not in favour of this ridiculous position of Douglas, the leader of PAM, Shawn Richards on Thursday instructed his lawyers to discontinue the court case.

In addition, the Mr. Richards filed a second motion of no confidence against the government on Wednesday 3rd July, 2013. This means that the government now has no excuse to avoid having the motion heard in parliament, which is due to meet on Monday 8th July, but with the government indicating that it has no intention of debating either the first or second motion.

In the meantime, Douglas is planning to table new proposals to change the electoral boundaries to give his party an unfair advantage in the upcoming elections.

PAM leaders have indicated that they will not leave the streets until Grant is released and will continue to return until the motions are heard or fresh elections are heard.