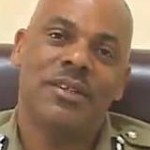 This latest development comes on the heels of reports that Francois was not permitted to board a flight from Hewanorra International Airport in St Lucia to the United States to participate in US-organized and financed training programmes.

In a statement of Friday, the government of Saint Lucia said it is aware of the concerns and anxieties expressed by the public over what it described as the decision by the United States to disallow officers of the Royal Saint Lucia Police Force from participating in several training programmes arranged or financed by the US.

The statement said that Prime Minister Dr Kenny Anthony will, on a date to be announced early next week, explain and address the issues of concern and, in particular, the reasons for the actions of the United States against officers of the Royal Saint Lucia Police Force.

There is widespread speculation locally that the US crackdown may have something to do with the US State Department’s 2011 human rights report on St Lucia that described 12 potentially unlawful fatal police shootings during the year, some reportedly committed by officers associated with an ad hoc task force within the police department.

There was only limited progress by the director of public prosecutions (DPP) in reviewing and other investigations of unlawful killings dating back to 2006, the report added.

The report also said that the government did not implement the existing anti-corruption law effectively, and officials sometimes engaged in corrupt practices with impunity.

During Francois’ absence, it has been suggested locally that former Deputy Commissioner Hermangild Francis, who was responsible for crime, prosecution and discipline, will be brought back on a three-year contract.

Francis joined the Royal St Lucia Police Force in May 1975, and retired in April 2008, at the rank of deputy commissioner. Presently he is the director of security at the Windjammer Hotel. He is the holder of a Bachelor of Laws (LLB) degree from the University of the West Indies.

He comes from a family deeply rooted in law and order and politics. His brother is president of the St Lucia senate, Claudius J. Francis.

Natta-Nelson is fighting for you, PM Dr Drew assures constituents of Number Seven