Last week, The Nature Conservancy’s Eastern Caribbean Program conducted a four-day Sensitization Mission with key stakeholders in Saint Kitts and Nevis. The meetings were dedicated to briefing newly elected government officials and agency leads on The Conservancy’s ongoing projects in order to ensure their continued support and commitment

At the commencement of the Mission on Tuesday, June 9th, a national consultation at the Ocean Terrace Inn brought together stakeholders from government ministries, non-governmental organizations and fisher organization. Key speakers from The Conservancy addressed the following programs: 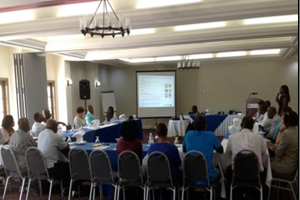 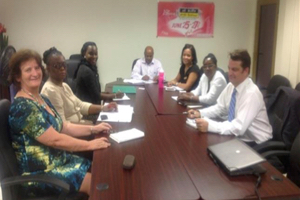 A four year project (2013-2017) funded by the German Federal Ministry for the Environment, Nature Conservation, Building and Nuclear Safety (BMUB). ECMMAN’s objective is to establish new and develop existing Marine Managed Areas, as well as promote sustainable livelihoods for fishers and coastal communities. The goal in Saint Kitts and Nevis is to establish the Narrows Marine Reserve and Fishing Priority Area. A corresponding national campaign, “This Is Who We Are” is raising public awareness of The Narrows’ value for local livelihoods and recreational enjoyment, as well as the importance of resource management to ensure its sustainability for future generations. Debt for Nature Swap Financing: An initiative to reduce national debt in exchange for long-term conservation commitments and financial planning.

Sustainable Financing and Management of Eastern Caribbean Marine Ecosystems (SFMECM). A project to develop sustainable finance mechanisms for the protection of 20 percent of near-shore and coastal areas in the Eastern Caribbean by 2020. This project is generously funded by the World Bank’s Global Environmental Facility, the German Development Bank and The Conservancy.

The consultation’s official remarks were delivered by Mr. Gene Knight, Director of the Policy Planning Unit at the Ministry of Agriculture, Health, National Health

In Saint Kitts, regional leaders from The Conservancy also met with the Honorable Mr. Lindsay Grant, Minister of Tourism, International Trade, Industry and Commerce, as well as with officials from the Ministries of Finance; Tourism; Sustainable Development; Infrastructure and Ports; and Agriculture, et al.

Attendees discussed opportunities for cooperation between The Conservancy’s initiatives and related local projects. Given similar priorities, it was recognized that project leaders must collaborate to maximize success across programs and guarantee a positive impact for the people of Saint Kitts and Nevis.

“The level of support provided by these projects is unprecedented and it is incumbent upon us, as a country, to recognize that we must be proactive and take measures to enhance food security, build resilience to climate change and maximize the benefits of our natural resources in a sustainable way,” emphasized Ms. Janice Hodge, The Conservancy’s In-country national coordinator. At the close of these meetings, key technocrats and policy makers pledged continued collaboration to advance these critical projects. Ms. Ruth Blyther, The Conservancy’s Eastern Caribbean Program Director, described the Mission as highly successful and expressed sincere gratitude to those in Saint Kitts and Nevis working to protect nature for people today and for future generations.