West Indies off-spinner Shane Shillingford yet again proved his weight in gold, bowling Windward Islands to a 36-run victory over Leeward Islands and into the semi-finals of the Regional Super50 cricket tournament yesterday. 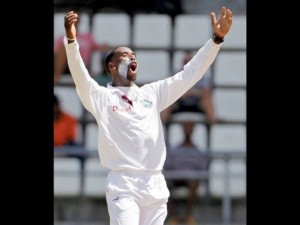 Defending 194 for nine off their 47 overs, the Windwards restricted the Leewards to 158 for nine, with the right-armer Shillingford picking up six for 32 at the Vivian Richards Cricket Ground.

The victory moved the Windwards to 12 points from their six matches and third in the standings after leapfrogging Barbados and Combined Campuses and Colleges, both on 10 points.

Batting first, the Windwards were led by captain Liam Sebastien who stroked 52 from 55 balls with three fours and a six, while Dalton Polius and Tyrone Theophile both scored 37.

Theophile, who faced 67 balls and counted three fours, posted 61 for the third wicket with Andre Fletcher (26) after the innings tottered at 11 for two.

When the Windwards slipped to 78 for four in the 25th over, Sebastien and Polius repaired the innings with a 52-run stand.

Off-spinner Jacques Taylor, in his first match of the season, finished with four for 46.

The Leewards then fell prey to Shillingford’s guile as they failed to recover from 69 for four.

Sherwin Peters (21) and Test opener Kieran Powell (17) put on 39 for the first wicket before Shillingford removed both.

Jahmar Hamilton, who top scored with 30 from 49 balls, and Tonito Willett, 22, tried to prop up the innings, but the decline proved terminal.

Super Overs should not be used to decide ODIs, according to South African opening…