Charlestown, Nevis – A graduation ceremony was held on Tuesday 20th June at the Maisie Bartlette Community Center in Brown Hill. Sixteen proud individuals graduated from a course in leather craft skills, which was coordinated by the Department of Social Development and led by Community Development officer, Malva Rawlins.

The facilitator was Mr. Keith Powell and the closing ceremony commenced with an invocation by Mr. Sam Corbin and the singing of the national anthem by participant, Rakida Edinborough.

The program was chaired by Miss Malva Rawlins who warmly welcomed all present and urged the participants to take what they would have learnt to the next level, even in establishing their own businesses

Mr. Keith Powell, the facilitator of the workshop, then gave a brief overview. He noted that it was his second workshop with the department. He stated that the first went down well but that this one was much better. 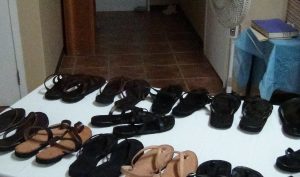 He was amazed at the number of persons who showed up and pointed out that based on that fact, the materials were limited but that they made several items which included belts; shoes; purses and key rings.

He was pleased with the energy level of the participants and said that it was obvious that they wanted to learn.

He also told them of a website ‘candyleathercraft,’ where persons can acquire tools and materials and also at the St.Kitts craft house. He also gave some tips for future reference for the participants who intended to go further with their newly learnt skills.He stated that the class was a very good one and said that he would have liked to have them for at least another week. This was received with loud applause.

Director of Community Development, Miss Janet Meloney stated that she was exceptionally pleased with the products on display. She commended the participants for sticking to the course and doing a great job. She even stated that some of the products looked very close to what is termed as ‘name brand.’

She also commended Miss Malva Rawlins for her perseverance and dedication to the task, despite the many hurdles that she had to overcome in order to ensure that the workshop was successful.

She thanked the facilitator, Mr. Keith Powell for his voluntary service and dedication and she also thanked the families of the participants who were so supportive. 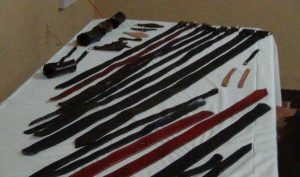 The class response was delivered by Mr. Evan Nisbett who noted that the class was a great class and stated that all of the individuals bonded well together and indicated that Mr. Powell was a great teacher. He then made a presentation to Mr. Powell on behalf of the class.

The Department of Community Development then also made a presentation to Mr. Powell. In presenting the gift, Mrs. Meloney also gave him a card which was signed by the participants. He was also presented with a certificate of appreciation.

Mr. Powell thanked the class for their thoughtfulness. The members of the graduating class then received their certificates, after which Mrs. Brenda Fyfield, one of the participants, rendered an original poem which highlighted certain features of the recently completed class. The class then sung lustily a rendition entitled ‘Yes You can.’