SKNFA Launches “Football Is Back”

The St., Kitts and Nevis Football Association (SKNFA) on Sunday recently launched its Football is Back Campaign at a ceremony at Jamrock Restaurant in Frigate Bay. The association presented its member clubs with brand new equipment needed in becoming COVID ready to resume football such as: thermometers, hand sanitizers, water bottles and new footballs to be used in training. Each team received enough water bottles to give each player a bottle as the COVID guidelines prohibit the sharing of water bottles among players. General Secretary of the SKNFA Stanley Jacobs explained the importance of the equipment presented to the teams. 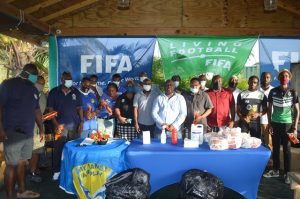 “In order to restart football, you must have football equipment. One of the pieces of equipment teams have been asking for are balls. Because they have been inactive from March of 2020, balls have been sitting idle, they are soft, they are no good. So we sought to bring some relief to the situation by providing you with enough balls that at least you can begin some practice sessions,” Jacobs explained. The SKNFA General Secretary added that at their last check only seven of the 21 member clubs have been actively training, which, he noted is still too low for football to restart. He anticipates that when the new State of Emergency regulations kick in, it will allow for competitive football. Hence, he stressed the importance of teams to be ready when that happens.

The “Football is Back” campaign will feature a series of practice matches in the lead up to an eventual return of competitive football providing that the new regulations issued by the government allows for this. SKNFA Technical Director Jeffrey Hazel gave some insight into the practice matches that are to be arranged. He explained that the SKNFA has to request permission from the Ministry of Sports to host these games. That request is submitted by the Ministry to the COVID-19 Task Force for approval. “We are making those applications so we can have those practice matches…we know a number of teams have started practices so we be starting with those teams,” Hazel said. He said he hopes with the donation of these equipment, more practices will be held by the teams in anticipation of a restart of football.

Meanwhile President of the SKNFA Anthony Johnson, noted that while the SKNFA looked forward to the return of competitive football, the world governing body of the sport, FIFA has provided financial association to the member associations including the SKNFA to assist with its member clubs and for the completion of the SKNFA leagues. Mr. Johnson said it is hoped that players in these clubs can also benefit from this financial assistance, but cautioned that the distribution of these funds must be approved by FIFA to ensure it’s in accordance with its regulations.
“We are presently working on the format in terms of how the funds are to be disbursed, but I would want to say all of this is geared towards restarting football. The funds are not to be made available for any other purposes. It must be used for restarting football. So we have to make sure that our 2019-2020 Leagues are completed,” he explained. Some 15 of the 21 member clubs were represented at the function where the presentation took place. The SKNFA promises to release more information in the coming days on the series of practice matches to come this month.