St. Kitts highlighted as “a warmth, character and identity that are all its own” in leading British newspaper

Journalist Nigel Tisdall, writing in the Travel Section of the Telegraph headlined: “St. Kitts: The Gibraltar of the West Indies” noted that the British left a legacy on the tiny Caribbean outpost where the colonisation of the Leeward Islands began.

Huggie. De Wiggle. Who’s Your Daddy? Love Sponge… Driving in the Caribbean is invariably entertaining, but the nicknames and slogans emblazoned on the vehicles charging around St Kitts are exceptionally vivid. Originally known as St Christopher and joined in federation with neighbouring Nevis, this mountainous, paddle-shaped island has an engaging piratical swagger. The local rum is called Shipwreck, menus offer intriguing dishes such as goatwater, pigtail soup and creole snapper, the snackettes and beach bars sport characterful names like Naomi’s Side Pocket and Mr. X’s Shiggidy Shack. 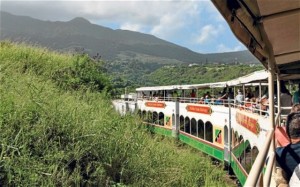 In September, St Kitts and Nevis held parades and put up triumphant billboards to celebrate 30 years of independence from Britain, but the bonds between us remain firm. The clearest example of this is a twice-weekly British Airways flight that still unites our islands, along with well-established Kittitian and Nevisian communities in cities such as Leeds and Birmingham.

Many islanders migrated to England in the Fifties and Sixties, but the smartest of their children have headed back to the beaches, sunshine and easy-going lifestyle. Stop to buy a mango and you could well get a free dose of Yorkshire wit thrown in, while the waitress bringing lunch might add a pithy Brummie aside on how okra is good for your sex life.

Such toing and froing is nothing new. Settled in the 1620s by English and French adventurers, St Kitts is considered the mother colony of the Leeward Islands. From here we moved on to colonise nearby Nevis, Montserrat and Antigua, while the French bagged Guadeloupe, Martinique and St Martin. In the cemetery of the Anglican Church at Middle Island you can visit the tombstone of Sir Thomas Warner, the first British governor of the West Indies, which is now surrounded by clucking chickens and the gaudy plastic ribbons and flowers that typify modern burials.

A mile away lies the historic site that astonishes every visitor to St. Kitts – the colossal Brimstone Hill Fortress, set at a height of almost 800ft on a volcanic hill on the island’s west coast. A UNESCO World Heritage Site, it is known as the “Gibraltar of the West Indies” and has commanding views along the coast and to the neighbouring Dutch island of St Eustatius. Dating from 1690, Brimstone Hill is now a national park and, in my view, one of the best picnic spots in the world. You can even camp overnight. An audioguide and a museum tell its story, and there is plenty to ponder in this monumental carcass filled with memories of the enslaved and the enlisted. There is graffiti carved by soldiers from over two centuries ago, and a water tank that was once deemed “fit for Negroes and cattle only”. In an overgrown cemetery I find a lonely headstone marking the passing away in October 1810 of Elizabeth White, a sergeant’s wife who died at the age of 29 having borne 10 children.

Down at Sandy Point, where the first English settlers arrived in 1623, St Kitts throws another surprise. Here, a small exhibition recalls the visit to these shores in 1754 of an English slave trader, John Newton, who experienced an epiphany that formed part of the inspiration to write the famous hymn Amazing Grace 18 years later

Dig a little deeper – literally – and you find the island’s past truly coming to life on the Wingfield Estate in Old Road. Here an indefatigable Yorkshireman, Maurice Widdowson, has been unearthing and restoring the ruins of the first working estate and rum distillery in the Caribbean.

After five years of toil and soil, the impressive results include the mighty shells of a sugar factory, mill and aqueduct, along with tobacco plants (the settlers’ first crop) that have once again started growing.

Great profits were made from the production of sugar in St Kitts, and the island’s painful love affair with it lasted for 365 years. Production ended only in 2005, and since then the island has been playing an aggressive game of catch-up with rival islands to woo tourists. Today there is an enormous Marriott resort with a casino and golf course, and a cruise ship terminal that will bring in an estimated 785,000 visitors this winter.

The island is awash with projects for new hotels and resort developments powered by a Citizenship by Investment Program that promises a St Kitts and Nevis passport to anyone who purchases $400,000 (£250,000) worth of real estate. In the north, Kittitian Hill, a 400-acre sustainable luxury resort with an Ian Woosnam golf course, is taking shape amid the verdant slopes of St Paul’s. In the south, which has good sandy beaches, there are plans for a marina, a Tom Fazio golf course and a 200-room Park Hyatt resort.

For all this “bigging up”, St Kitts remains at heart a laid-back place where it is easy to tune into the long-standing rhythms of the Caribbean. Head down to Major’s Bay on a weekday and you will probably have the beach to yourself. For something active, take a guided hike to see the 3,792ft peak of Mount Liamuiga, a two-hour climb through the glossy rainforest that emerges on the rim of a half-mile-wide volcanic crater that looks like some hallowed lost world where only one colour is allowed: green.

If you want to enjoy the island in style, check into Ottley’s, a hillside plantation hotel with lordly views and perfectly prepared dinners of coconut-crusted chicken, Caribbean lobster and soursop ice cream. And for something you can’t do anywhere else, ride the St Kitts Scenic Railway – a narrow-gauge line, built in 1926 to transport sugar cane, which now has a second life taking passengers on a delightful, 18-mile trundle through the fields and villages.

But the last word must go to the windscreen wits of St Kitts, as they weave around the potholes and wandering goats of this charismatic island. Here comes Rough Times and Blessed, there is Big Blue overtaking Proper Ting. I should probably bow to De Punisher, and while I’m tempted to give Reality a wave, my top prize has to go to Ooh Hoo. Because, from the moment you land here, wrapped in that blissful Caribbean warmth, bombarded by tropical colour, floating in a mesmerisingly clear sea – that’s just how it feels.

CUOPM not reponsible for any perceived inaccuracies in article.