The St. Kitts and Nevis Alumni Group received many commendations from the officials at the High Commission, including British High Commissioner Victoria Dean, for living up to the true spirit of Chevening by “Leading the Way” and being the most vibrant and active Alumni network in this region. The group was touted as a group to emulate, given the excellent camaraderie that exists amongst the group and the work they have begun to aid in nation building and youth empowerment, through their “Get Set and Ready for University Seminars”, their promotion of the Chevening Scholarship, for the assistance they continue to render to nationals who apply for the Scholarship and for being the only country in the Eastern Caribbean, who has been able to have a winner(s) of the scholarship consecutively for the last five years.

The Meeting and Networking reception not only provided the Chevening scholars an opportunity to become familiar with the High Commission staff, but provided an excellent platform for them to interact with their Chevening counterparts across the region, with whom they were able to exchange ideas and experiences and initiate collaborations to foster the further development of the Caribbean region. Recently returned Chevening Scholars Ms. Kimberley Evelyn and Ms. Kurlyn Merchant were also amongst the four recent graduates, who received their certificates of completion from the High Commissioner at the event.

The first day’s event was also punctuated by a brilliant and thought provoking lecture by renowned Caribbean author and historian Dr. Lennox Honychurch of Dominica, who is also a Chevening Alumnus. His lecture which was entitled “Caribbean Developments and the place of the Chevening Awards”, gave a brilliant overview of how the Caribbean has developed from the days of the West Indies Federation to now, the type of leaders we have had over the years and how the Chevening Scholarship has helped to mould a significant number of leaders from different fields across the Caribbean. The First National Hero of St. Kitts and Nevis, Robert L. Bradshaw, First Premier of St. Kitts-Nevis and Anguilla was singled out several times during the lecture, to the delight of the St. Kitts -Nevis group members, for his exemplary leadership and stewardship as a regional statesman, although he only was privileged enough to receive primary school education.

On Day 2, which was a Group Leader’s Meeting, the St. Kitts and Nevis Group Leader, Ms. Sonia Boddie was one of two Group Leaders who were tasked with addressing the regional grouping. Boddie delivered an exciting motivational talk to inspire other groups to become more organized and active, by highlighting the successes of her group, challenges they had encountered and measures implemented to overcome them. The weekend activities concluded with members signaling their intent to strengthen the Chevening network and forge new collaborations, as they aim to achieve the mandate of the Chevening scholarship, which is to equip more and more leaders in the region.

The Chevening Scholarship is a fully funded scholarship offered by the British Government for persons to study a one-year Masters degree in the United Kingdom. Persons interested in applying for this scholarship must not only have a Bachelor’s degree and a minimum of two years professional work experience, but they should also demonstrate leadership and a commitment to return to their country to aid in nation building. Annually, the application process is from September to November, and is done online at www.chevening.org. Mr. Vondez Phipps of Sandy Point is the current 2015/2016 St. Kitts- Nevis Scholar who is pursuing a Master of Laws in the UK. 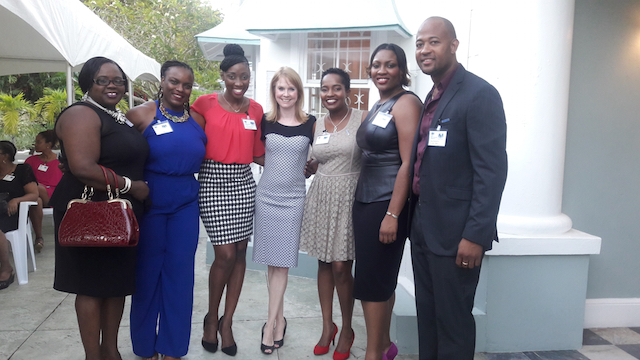