Basseterre, St.Kitts (July 15th 2012):-It was a warm and sunny afternoon in New York City on Sunday July 14th 2013 when over 250 Nationals of St. Kitts and Nevis assembled at St. Luke’s Episcopal Church, Parish Hall at 777East 222nd Street, Bronx in New York. 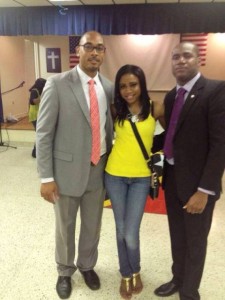 The meeting began at approximately 6pm with the National Anthem of the United States of America bringing into focus that UNITY was alive and well.

It was followed by the National Anthem of our beloved federation, “O Land of Beauty”.

The Chairman, Dr. Irving Sweeney in his usual eloquent style began with words of welcome to all who had made the effort to attend at relatively short notice. But he confirmed that the Nationals were indeed concerned about the welfare of the Federation and crisis that it appeared to be in.

We reminded the audience of the words of the Calypso by King Arrow “Will you see your Country dying and not lend a helping hand”? Loud shouts of “NOOOOO” emanated spontaneously from the crowd.

Mr. Eugene Francis was then called upon to do the opening prayer. He thanked God for the blessings he bestows on us as a Federation and as a people so in need of his guidance. And he asked God to give the Leaders wisdom, and courage and especially he asked for truth and decency to come forth from the speakers present. His thoughtful and moving prayer invoked a fervent “Amen” from the audience.

Mr. Bernardo Phipps then introduced the first speaker, Mr. Jonel Powell deputy leader of the Peoples’s Action Movement . Jonel in his opening addressed many of the issues facing our small Federation giving an over view of the political situation, the unemployment, the difficult economic situation and the desperate need for a Unified Government to take over the reigns of leadership. He was eloquently passionate and displayed a yearning to see his people getting the opportunities that are so badly needed to give meaning to the youth of the Federation. He stressed the need to “teach people to fish and not to keep them dependent on simply being given a fish when convenient , especially at election time.

He supported the need for Unity and echoed the cry for togetherness to get our Country back on track. The need for us to move forward as “Familllly” !

He was well received and given a rousing applause for his presentation.

Mr. Richards gave an outstanding overview of the current situation in St. Kitts and Nevis with special emphasis on the happenings in St. Kitts. He gave examples of the poor leadership of Prime Minister Douglas and the fact that Douglas was an illegitimate Prime Minister with a minority Government. He recounted many of the bad decisions that Douglas had taken that had caused the Country to be in the poor state that it is in. He spoke about the economy, the unmanageable National Debt, the haircuts to bond holders, the high cost of electricity, the hardships caused by VAT.

He elaborated on circumstances surrounding the The Motion of No Confidence that had been tabled some 7months before and still not debated in Parliament . The opposition’s conscious decision to withdraw the case brought before the court for the MONC in an effort to encourage the Speaker to bring it to Parliament, the many legal efforts that were made and still the deliberate refusal by the Speaker and the Prime Minister to frustrate the wishes of the people.

He spoke about the dictatorial rule that the Prime Minister was displaying in an effort to retain power at all and any costs. The proposed gerrymandering of the boundaries in both St. Kitts and Nevis.
The land swap for debt and the continuous giving away of the people’s lands to foreigners by Douglas were dealt with in detail.

Mr. Richards made it clear to all that it was not a pretty picture back home, but there was hope for the future.

He expounded on the Unity concept that the party had entered into with two other parties, the PLP, (People’s Labour Party) led by Hon. Dr. Timothy Harris, and the CCM, (Concerned Citizens Movement) . He explained the need to unite and the way forward in Unity.

His party’s solutions to the problems were then clearly given. The reduction of electricity surcharge by 25% plus the removal of the Customs Service charge of 6%. The removal of VAT from several basic food items and medication for chronic illnesses. The urgent need to introduce legislation for integrity in Public Life, term limits for the Prime Minister, set election dates and an overall electoral reform process to be undertaken.

Mr. Richards made his case, he explained it for all to understand and proposed constructive and workable solutions to address these problems that the tiny Federation was facing. The audience listened, they understood the difficulties that were been revealed, they were captivated in the simple, caring and effective methods for relief that were been laid out and they obviously arrived at the conclusion that indeed there was hope at the end of the tunnel. They gave Mr. Richards a standing robust applause.

Questions and answers then followed. But because of the clarity of the presentations many people were satisfied. One particular question put to the speakers was “would the new Government jail Prime Minister Douglas after he lost the next election” to which Hon. Richards made clear that the new Unity Government would not waste scarce resources in having any commission of inquiry but would undertake to have forensic experts do investigations in to the perceived corruption that has been taking place by the present Government and the final decision would rest with the court of law.

Another question was whether or not Mr. Richards would support a Prime Minister out of Nevis. Mr. Richards indicated clearly that it did not matter which of the Unity members would be Prime Minister as all were qualified and suitable to the post. He would support the person would be selected when the time came. His only interest was in the people and what was best for the country as a whole.

Other questions relating to health care and the proposed boundary changes were also ventilated. In closing, Mr. Richards reminded the audience that there support in every respect would be needed. Whether financial especially as more court actions might be necessary if the Government really attempted the boundary changes, moral, and spiritual.

The fruitful and impressive meeting came to a close at approximately 9 p.m.