This year’s theme is: ‘Unleashing the professional in you.’

The youthful interns who will all be hoping to land a job for the summer vacation period, assembled at the St.Paul’s Anglican conference center, for the orientation and opening exercises.

Miss Chaliese Morton then gave a wonderful rendition of the national anthem and this was followed by an overview of the program by Youth coordinator, Miss Zahnela Claxton. 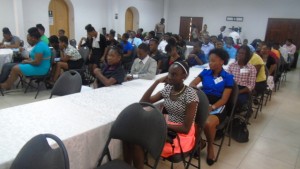 She noted that this in effect was phase three, as this part of the exercise was preceded by a registration and an interview phase.

Some sixty persons registered and Miss Claxton noted that her department with the help of the local employers, is hoping to fit at least forty-five of the individuals into the world of work.

She however admonished them to continue to impress: In their punctuality; the way they dressed and the way they interacted during the sessions. This she warned them to take very seriously as she reminded them that all of the persons may not be able to get jobs at the end of the selection process. She however noted that all of the persons will be better prepared for the world of work, due to the type of training to which they will be exposed.

She asked them to take the training sessions seriously as the values learnt will hold them in good stead for the remainder of their lives.

Some of the topics to be covered include:
• Let’s talk
• Go pro
• Netiquette
• Sell yourself
• Making money count

Several local professionals are set to engage the interns as facilitators.

A former participant in the program, Miss Cordesia Walters explained to the young adults why the training will be so important and further stated that the program would have helped to shape her life.
Permanent Secretary in the Ministry of Social Development, Mr. Keith Glasgow, then addressed the gathering.

He informed the young interns that at any given work place, they will see good and bad examples in terms of work ethics. He asked them to seek to follow the good ideals and be trend setters in this regard.
He also highlighted five attributes/qualities that he wanted them to focus on:
• Specialized knowledge in a chosen field
• Interpersonal skills
• Regularity and punctuality at work
• Going beyond the call of duty
• Training and development

Youth development Officer, Stephan Joseph then led the interns into an ice breaker of sorts, as each one had to identify a career choice and qualify it with an accompanying adjective. For example: ‘Nice Nurse.’
Shortly thereafter, the interns got into their first official session with Guidance counselor, Mrs. Lornette Morton.

The interns will be divided into two main groups for the remainder of the week. One group will meet at mornings and the other during the afternoons.

According to Miss Claxton, this will enable more quality time spent with the potential employees.
At the end of the training and final selection process, the chosen interns will be assigned to work places across the island for a six week period and their wages will be paid by both the employer and the Nevis Island Administration with each entity funding 50% of the wages.