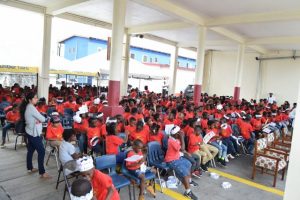 The march climaxed the July 10 to 14, half day programme organized by the St. Kitts and Nevis Fire and Rescue Services. Back at the Basseterre Fire Station, several students took to the microphone to share with parents, sponsor representatives and government officials attending the closing ceremony, some of what they learned.

These included the “Stop, Drop and Roll” action if a person is on fire; using flare guns or smoke to indicate your position if lost at sea; the pull, aim, squeeze and spray (PASS) motion for using a fire extinguisher; and the elements needed to make fire.

At the closing ceremony, Fire Station Officer, Garfield Hodge, said that for the past 15 years, the Summer Safety Programme has developed a culture of safety by training thousands of children.

“This programme has been sustained for 15 long years. Our organization has played a critical role in positively moulding and shaping young minds,” he stated. “We have contributed to national development as our programme has touched and impacted countless lives in making the right decisions and becoming good and productive citizens.”

Attorney General, Honourable Vincent Byron Jr., commended the organizers and said that he was impressed with the children as they paraded through the streets, lead by one of the fire trucks. He encouraged the 5 to 12 year-old participants to be mindful of their actions as the summer rolls on.

“The values that have been taught to you in terms of fire safety helps you, your family, and the whole community that we live in because you are very conscious of how to keep your home safe,” the attorney general stated. “It is important that after this week that you go home and practice what you learnt. The whole idea of this programme is that you, as young people, will learn how to be conscious of your own security and fire knows no master.”

Carib Supply Ltd is one of the programme sponsors. The company’s manager, Howard Richardson, said that he was pleased to learn that the summer initiative has been expanded from three days to five. He commended the men and women of the SKNFRS and pledged continued support from his company for the initiative.

The theme for the 2017 event was “15 Years of Cultivating a Culture of Safety.” Sessions were held simultaneously at the Basseterre, Tabernacle and Sandy Point Fire Stations. The programme was also hosted in Nevis at the Jessups Community Center from July 03 to 07.