(BASSETERRE, ST. KITTS) – Three Nevisians, Hon. Vance Amory, Hon. Mark Brantley and Senator Michael Perkins were among seven individuals who were sworn in last evening Sunday, February 22, 2015 as Ministers of the Government of National Unity of St. Kitts and Nevis. 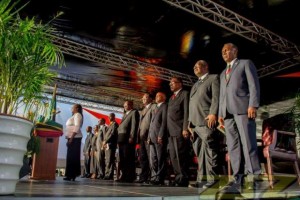 The Swearing in Ceremony took place at the Warner Park Stadium where thousands of supporters and dignitaries gathered to witness all the Ministers take the Oath of Allegiance and Office of Secrecy. The instruments of the appointments were signed and delivered to the Ministers by Governor General, His Excellency Sir Edmund Lawrence and the Oaths were administered by Resident Judge, Her Ladyship Justice Marlene Carter.

Leader of the People’s Action Movement (PAM) Hon. Shawn Kenneth Richards was appointed as Deputy Prime Minister, and he now holds the Ministries of Education, Youth, Sports and Culture.

Deputy Premier and Deputy for Leader of Team Unity, Hon. Mark Anthony G. Brantley was assigned to Minister of Foreign Affairs and Aviation.

The third Nevisian to be sworn in was Anthony Michael Perkins. He was appointed Senator in the Federal Government. He was not assigned a portfolio.

Senator Vincent Fitzgerald Byron was sworn in as the Federation’s Attorney General and Minster of Justice, Legal Affairs and Communications.

The ceremony was chaired by Hon. Hazel Brandy-Williams Junior Minister in the Nevis Island Administration.