Hundreds of mourners showed up at the Charlestown Methodist Church on Saturday afternoon, 15th June. The occasion was the funeral service of the late, talented Nevisian Sportswoman, Tesril Nisbett who passed away unexpectedly on Friday June 7th. 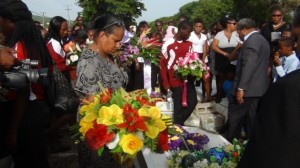 Several impressive contingents of athletes were present, dressed in uniforms. Most of them were former team mates of the late sporting star.

Glowing tributes were paid on behalf of the young lady who excelled at most sports, including her beloved Football; the Javelin; general athletics; Cricket and Basketball.

These included tributes by Lester Blackett of the NAAA who indicated that certain recommendations have been proposed to the Nevis Island Administration for Tesril to be honoured for her sporting contributions. This includes a proposal for a scholarship fund to be named in her memory.

Scottie Hanley indicated that Tesril was down to compete in the Carifta trials scheduled for Sunday 16th June and noted that the female javelin event wil from hereon be named in her honour.

Her number 5 jersey worn for the CCC Bath United Football team was also officially retired and signed off by her teammates and will be placed for safe keeping at the Nevis Sports Museum.

Family members also presented sterling tributes in song and the touching eulogy was presented by her brother, Eustace SMARTY Nisbett.

The impressive contingent of uniformed sports men and women, led the procession all the way to her final resting place at the Bath Cemetery.

Notably, three of her closest team mates stayed close to the coffin: Kel, Kerisha and Rozel.

It was a fitting tribute to a lass who had represented her local schools, various teams, Nevis and the Federation of St.kitts and Nevis, really well.