The way I see it, we should always seek to give HONOUR, WHERE HONOUR IS DUE.
On Friday last, I had the honour (no pun intended) and privilege, as my custom is, to not only attend but also lend financial support to that wonderful program, tagged, The Alexander Hamilton Scholarship fund.
You know, I think it is a tremendous program, which lends financial support to deserving and needy students in the two public Secondary schools, each year, as new students are added on an annual basis.
And so, I pause to say kudos to the Trott family, with whom the idea originated; kudos to Mrs. Janet Meloney and her hard working team at the Community Development Department; kudos to the Nevis Historical and Conservation Society, for ensuring that the program continues and kudos to Mr. Hensley Daniel who revived the program, after some years of dormancy.
My only real concern with the program, is that I still wonder why the only private Secondary School on the island, is not included and I sincerely hope that one day soon, that school will also be included in the package.
So, I was at this wonderful ceremony for yet another year and thoroughly enjoying myself as I chatted with friends and listened to the music being played.
Then it happened.
Enter, Mrs. Sheila Daniel, widow of the first Premier of Nevis, Sir Simeon Daniel. 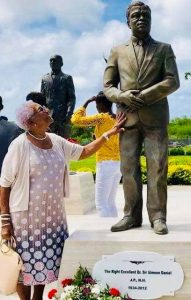 As we crossed paths, we exchanged warm greetings and as I was about to pass by, she called out to me and asked if I could help her to find a seat.
Of course I was most willing to assist but realized instantly that the chairs were basically all taken.
So, I thought quickly and approached two of the persons who seemed to be seating persons and I told them that Mrs. Daniel was asking for a seat and if they could kindly arrange for such.
By, the way, the lady is so humble, she specifically told me that she did not want to sit at the front, where I firmly believe she should have been seated, but preferred a seat towards the back.
The response I got from the two ladies, was appalling, to put it mildly.
They basically told me that there were no chairs available and when I pointed out that Mrs. Daniel is a dignitary, one of them said quite bluntly: ‘Well, she is not a dignitary at this function.’
Well I newa!
How she get so? Is she truly aware who Mrs. Daniel is?
Hey, I have always said that if my good friend DABBY, of blessed memory, was to be made the Deputy Governor General, I would be the first to salute, when necessary and pay homage to the man and his office!
I don’t care what function they have in Nevis, whether we like it or not, there are some people who should be treated in a particular manner.
(All men are equal but some are more equal——)
Premier Mark Brantley and Mrs. Brantley; Ministers of government and their spouses; Deputy Governor General, Mrs. Hyleta Liburd and Mr. Elmo Liburd (I fondly refer to him as ‘his honour’).
Well, if his wife is ‘her honour,’ I was never too bright in school, but it logically follows, that he would be ‘his honour.’
Former Premier, Hon. Joseph Parry and Mrs. Parry; former Premier of Nevis, Hon. Vance Amory and Mrs. Amory—and the list can go on.
However, within that list of names, Mrs. Sheila Daniel’s name, must be up for special mention and that lady should have been given a seat, even if they had to go and make one!
Fortunately, a young lady, saved the day.
She was seated a few rows from the back and had her child in a separate seat. When I asked her if Mrs. Daniel could have the child’s chair, her response was instructive:
‘Of course, but Mrs. Daniel should be seated up front!’ she exclaimed.
I told her that the fine lady did not want to be seated at the front and she immediately put her child in her lap and offered the distinguished daughter of the soil, the seat.
Kudos to her too!
Now we live in a Christian community and the bible clearly states that persons who are worthy of honour, must be given their due:

“Matthew 22:21
They say unto him, Caesar’s. Then saith he unto them, Render therefore unto Caesar the things which are Caesar’s; and unto God the things that are God’s.

1 Timothy 6:1
Let as many servants as are under the yoke count their own masters worthy of all honour, that the name of God and his doctrine be not blasphemed.

1 Timothy 5:17
Let the elders that rule well be counted worthy of double honour, especially they who labour in the word and doctrine.

John 4: 44: For Jesus himself testified, that a prophet hath no honour in his own country.”

If we say we love God and we seriously want to go to heaven, we better start giving respect to the persons around us, who we can see.
How can we say we love God who we cannot see and hate our brothers and sisters, who we can see?
Which heaven you think you are going with that kind of an attitude?
I think we should stop and think and give honour where it is due.
That’s the way I see it. How do you see it?
-30-