(CHARLESTOWN, NEVIS)- Now that all the Primary Schools Annual Sports Meet 2014 have been completed, coaches for the schools are now gearing up and preparing the athletes for the big Inter Primary School Championship which is slated to be held on Wednesday, April 2, 2014 at the ET Willet Park.

Last year the competition was highly competitive and keenly contested, as the athletes from the various schools battled for the championship. At the end of it all the results were debatable and concluded in controversial circumstances when it was announced that the Charlestown Primary School and the St. Thomas Primary School were joint winners.

The athletes have approximately two weeks to prepare for the annual track and field competition and unlike last year coaches have proclaimed that there would be ‘no tie’.

At last year’s meet, Charlestown Primary School was thought to have won by a mere one point, but persons who watched the meet and who were supporting the St. Thomas’ Primary School disagreed. Later, a review of a race showed that St. Thomas placed in a race which was never recorded; hence an extra point was added to their overall score, stimulating a tie between the two schools.

“There’s no doubt that we won the championship last year”, said Elquemedo Willett, head coach at the CPS. Willet said that he sees himself and the school as champions. He feels that the matter last year was stretched, until they were able to find a point from a disqualified race in order to tie the championship to please the STPS. Willet believes the decision was ‘foolish’. However, he told Nevispages that the school stands a better chance of winning handsomely this year and his athletes looks even better than last year. 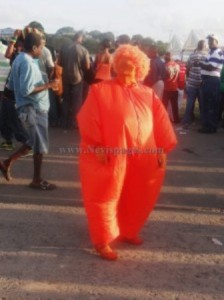 Sportscaster at the St. Thomas’ Primary School, Mr. Eddy Caines, stated that there was never a tie. Caines said that the STPS was the only winner for the championship meet last year. He expressed that the students were disappointed when it was announced that they were tied with CPS. Nonetheless, Caines believes they won ‘hands down’. He further stated that the athletes are training hard and are confident that they would win the sports meet on April 2, 2014.

Inter Primary School Championship is the biggest event here on Nevis. Thousands of persons turn out to the ET Willet Park every year to witness this meet. While some spectators may be fully interested in the championship others attend the meet to make a ‘fashion statement’.

Ms. Jean Caines told this publication, that she and her counterparts are currently working on their outfits and they are coming with full force to defend the Charlestown Primary School. Over the years many persons look forward to see the ladies in their creative costumes.

Vaccine rollout: We want to see our country go back to normalcy, says Nurse Gabriel

Statement by Prime Minister Dr. the Hon. Timothy Harris on the Occasion of…

PM Harris’ Statement on the Passing of the Hon. Hubert Benjamin Hughes, Former…