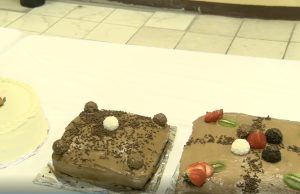 Gingerland –Nevis Pond Hill community center was wonderfully transformed, on the evening of Wednesday 19th June. The superb decorations were completed by Ms. Leander Cornelius and her daughter and certainly gave rise to the regal setting, as thirty immaculately attired individuals, took center stage in an impressive graduation ceremony, royally decked in African wear.
It was the much anticipated graduation exercise for the cake making class, which was held at the Community Center, over a number of weeks.
The graduants made their appearance to the accompanying strains of steel pan music from the talented hands of Gavin Pattison.
This was followed by the invocation and the rendition of the national anthem, on pan, by Mr. Pattison.
The energetic master of ceremonies, Mr. Rohan Isles, who kept the proceedings lively throughout the evening, was introduced by Center Manger, Miss Veronica Brandy, whose idea it was to host the cake making and icing class.
Facilitator Mr. Silvester Wallace, then gave brief remarks and noted that he was really proud of the class, referring to his students as ‘exceptional.’ He pointed to their general attitude of sharing, caring and assisting each other.
Some of the cakes made included cheese cake; plain cake; fruit cake; apple spice cake and red velvet cake.
He also pointed to the fact that overtime, as a result of his courses, several persons have gone into entrepreneurship and are doing pretty well in the pastry making business.
He concluded by urging the ‘powers that be’ to ensure that nobody hinders such classes from taking place.
Mrs. Adina Taylor then gave words of inspiration/motivation and pointed to the fact that many persons may be lonely but such classes serve as a source of camaraderie and asked that such classes be continued.
Gavin Pattison then rendered a musical item on pan and this was followed by an address by Minister of Community Development, Hon. Eric Evelyn, who congratulated Center Manager, Veronica Brandy for her efforts and lauded Facilitator Wallace for his sacrificial work.
He noted that he was pleased when such classes occur, as it means that the community centers are being utilized, day and night.
He also shared a few light moments with his audience, as there was mention of someone attempting a corn cake.
He warmly congratulated the graduants for sticking with the program and completing the course.
Center Manager, Ms. Veronica Brandy, in giving an overview of the course, stated that it commenced on the 5th of January and was initially scheduled to be completed in April, but certain circumstances, forced the class to be halted on the 27th February.
However, with the persistence and determination of the facilitator and his students, the class resumed on March 23rd and now the participants can celebrate, having completed the course.
The graduating class then showed that they had other skill sets, as they rendered a wonderful item in song.
Mr. Shefton Liburd, then gave the class response and saluted the efforts of Miss Brandy and more especially Mr. Wallace.
He made reference to a particular red velvet cake, which apparently was made with salt instead of sugar and that certainly added humour to the evening’s proceedings.
The vote of thanks was delivered by Mrs. Shari Hanley-Merchant and the graduating class then presented gifts to Miss Veronica Brandy and Mr. Silvester Wallace.
The certificates were then presented to the graduates by Permanent Secretary in the Ministry of Community Development, Mr. Keith Glasgow.
The evening concluded with the viewing and sampling of the many wonderfully designed cakes on show.